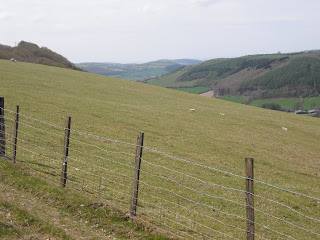 Back home now and it feels really good.

I worked on some more jazz with Harriet.  She picks things up so fast!  Also, I talked Welsh most of one night with Sarah, Gwen and John.

I'm understanding more again and speaking a bit.  John's got a north Welsh accent and I was still only catching a little over half of what he said but enough to get the gist.  Even answered some questions which is good cause my brain usually burns out at that point.

Tuesday - Went to Idloes' farm.  He was nice enough to take me for a visit.  I helped a little with the sheep.  There was a dead newly born little lamb, left by its mother.  Idloes was saying that sometimes the young ewes don't know what to do with a baby lamb and sometimes just leave them out in the field.  We also found another other dead lamb, slightly older.  Don't know what happened to this one.  Idloes had to give one sheep some anti-inflammatory and penicillin.  The poor sheep had one of it's eyes pecked out by some crows and magpies, her face was covered in blood.  He was bottle feeding her two lambs until she recovered. 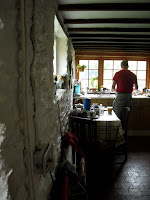 Part of the problem is the crows are starving.  I think farmers aren't allowed to leave carcasses on the fields anymore.  Some new law passed by the European Union.  The Union seems to have quite a bit of control over everyone, meaning all the European nations are losing some autonomy.  At any rate, with no food left for the carrion birds, they've resorted to attacking live sheep.

Then I helped him put the sheep in a little run so he could give them deworming medicine.  They can waste away otherwise.  A couple of the sheep were starting to get foot rot, so he clipped their nails and put some sort of spray on them.  For lunch he fed me about 6 pieces of toast with jam.  I helped him build a fence but really he did the bulk of the work.

Idloes moves like a rugby player.  I think he's in his early fifties, yet he runs and dodges back and forth catching sheep like crazy!  He's strong as hell, fast and doesn't muck about.  "Welsh farmers are sensible and use common sense."  I believe that's what he said.  Sheep don't look like much but trust me, they're just as strong and fast and really heavy.  He was picking them up no problem.

I still can't believe that the crows pecked that one's eye out.  Insane...
Ieuan Evans back home once said, "whoever said mother nature was loving has never spent a day outside in their life ... mother nature's a bitch!"  True.  She's goddess of life and goddess of death all at once. 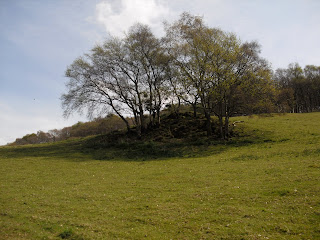 It's what the new age pagan cults are missing.  So airy fairy, "let's be one with nature" and not in the least bit grounded in reality.  The main problem with Celtic new age, is it's not really based on Celtic anything, only a fraction of the old myths. Doesn't represent Celtic culture as it is or even was.  Creating new stuff unnecessarily when the customs already exist.

Sorry, got distracted... The farm house used to belong to Lewis Morris and his orchard was here as well.  Lewis Morris (1701 - 1765) was a poet and was the fellow who re-discovered the Robert ap Huw manuscript (ancient harp music).  He'd made some notes on the manuscript trying to decipher the code (he left the humble note, "this is only my best guess").  It's uncertain where he actually found the manuscript but he collected many ancient documents, mainly poetic.  He was most known for reinvigorating the old poetic forms and for his praise of penillion singing (improvised verse with harp).

I really enjoyed my time on the farm.  Though I didn't help much, I still like this kind of work.  It helps to keep everything balanced.  Music can put a person in such a crazy head space.  Doing some proper work with your hands, working in sheep dung, helps keep everything grounded.  Utterly grounded in reality.

Met with Fran afterwards by accident.  I was smelling of sheep but had a nice little tea and played with the kids for a bit.

Then home to practice.

Mid-week - Got to about 17 tunes and hit the wall.  Couldn't go any further.
Made a curry and invited Idloes to eat with me and also gave some to Sarah.

Later, made cawl and got up to 20 tunes and actually wrote a jig called "Aderyn Du Aberdâr".  I'm averaging around four or five hours a day of harp practice right now.
Next gotta work on some of the Sild tunes and a couple of Julie's tunes and maybe even some of my own.

Alright, next time, off to Pencader to play with Julie...
Hwyl.
Posted by gwdihw y nos at 17:23