Day 32 - another digression - Taliesin and Myrddin 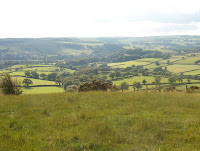 Both Julie and Ceri are well versed in poetry (an interest amongst many other interests).
Actually, it was Julie's reading of a couple of Thomas Hardy poems that really turned me onto his work.

At some point, we started talking about Dylan Thomas, easily my favourite poet.  Ceri suggested I check out Vernon Watkins, best friend to Dylan.  Apparently, the two helped each other with their poems, often exchanging ideas.  They belonged to a group of artists in Swansea called the "Kardomah Boys".  One of the painters was Ceri Richards who painted a poem of Vernon Watkins called "Music of Colours".

Which brought us to a discussion of Taliesin and Myrddin (Merlin), poets from the Celtic golden age.
Here are the legends for both of them.


As far as anyone can tell, Taliesin lived approximately 530 - 599 AD.  His work survives in "The Book of Taliesin".  A portion of the poetry here can be dated to the original Taliesin and the rest falls between 800 - 1250 AD.  He wrote praise poetry for Urien and Owen ap Urien in the Old North as well as Brochfael Ysgithrog, king of Powys.  In legend he's listed as a bard to King Arthur, the Bear-man.
Here's his story.


Gwion Bach was a servant to the sorceress Ceridwen and her husband Tegid Foel.  She had a daughter, Creirwy, the most beautiful girl in Wales and a son, Afagddu (also known as Morfran) the ugliest boy in Wales.  (Afagddu means 'utter darkness')
Ceridwen decided to help Afagddu by creating the elixir of knowlege and inspiration in her cauldron.  The mixture had to boil for a year and a day.  She got little Gwion Bach ap Gwreang (from Powys) to stir the mixture.
As Gwion Bach was stirring, three drops of hot liquid spilled onto his thumb and, without thinking, he put his thumb in his mouth and gained all knowledge and insight.
Ceridwen was furious as the potion was now wasted, and wanted to kill him.
To escape, he turned himself into a hare so she became a greyhound.  He ran to the river and turned into a fish and she an otter.  Gwion left the river and turned into a little bird and she chased him as a hawk.
Tired, he fell down into a field of oat corn and became a bit of grain and she turned into a hen and ate him.
She became pregnant and gave birth (rebirth) to a little boy (little Gwion).  And she put him out in the ocean in a leather bag.
He was found in the county of Ceredigion by Elphin son of Gwyddno Garanhir.  When Elphin saw the little baby with his shining brow he called him "Taliesin" (literally 'radiant brow') and Taliesin wrote his first poem then.
When Taliesin turned 13, he was brought before Maelgwn Gwynedd.  Maelgwn and his son tried to trick Elphin and Taliesin so Taliesin sang stanza after stanza predicting Maelgwn's downfall.  In response, Maelgwn's bards could only make the noise "blerwm, blerwm" on their lips and talk like babies.

So Taliesin gets his Awen (bardic inspiration) from the Cauldron of Knowledge.


Then there's Myrddin.  Some take the guess that he lived around 535 - 590 AD, though it's hard to really say.  He was said to be the son of Morfryn and had a twin sister named Gwendydd.  His stories are recorded in "The Prophecies of Merlin", "History of the Kings of Britain", "The Life of Merlin" and his poems, prophecies and sayings are mainly in the Black Book of Carmarthen and are of a later date.  In legend, he is also associated with King Arthur.
Here's one of his stories.


Myrddin had become a bard to Gwenddoleu, pagan leader of a tribe in the Old North.  Gwenddoleu went into the battle of Arfderydd and was killed there by Rhydderch Hael (possibly in 572AD).  Myrddin witnessed the slaughter of his adopted tribe and went completely crazy.  He fled into the forest and lived with the wild animals and had conversations with wild pigs and apple trees.
He would never live in a house again, his time spent only in the shelter of rocky caves or in valley of the oak grove or high up in the birch tree branches.

His sister, Gwendydd, who also had visions, met with him frequently.  She brought him food of bread and butter.  And she brought him these drinks - wine in silver, mead in horn, beer in sycamore, milk in a white jug and water in an earthen jug.  After discussing the drinks and deciding to only drink the water, they sat and interpreted five dreams together.  And she, being learned, wrote them all down in a book.
Myrddin continued to write poems and make prophecies, even predicting the manner of his own death.
And that is how he came to be called Myrddin Wyllt (Merlin the Wild).


So Myrddin gets his Awen (bardic inspiration) from the Wilderness of Intuition (or wisdom of the wilderness).

In the Black Book of Carmarthen, there is a short poetic dialogue between Taliesin and Myrddin.  It's mostly about war and it ends quaintly with Myrddin saying, "Since I, Myrddin, am second only to Taliesin, let my words be heard as truth."


So, Taliesin, born of Knowledge and Myrddin, born of Intuition are the arch-types for Vernon Watkins and Dylan Thomas.