Day 38 thru 40 - Ystalyfera with Martin and Sille 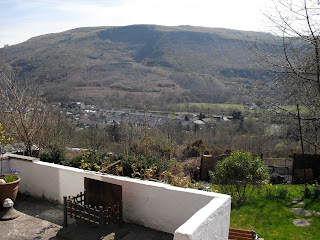 (A quick note, Martin and Sille have a band called Sild, and you should all buy their CDs.  Trust me, they're incredible!)

The bus trip from Aberystwyth to Swansea (Abertawe) was a long three hours.  When I got there I did a quick search for cassette tapes.  Nearly impossible to find.  In all the stores I asked for them, almost all of them laughed at me like I was crazy.  "Tapes?!  What are those?!"  Duw, duw... tapes are way better than CDs (and vinyl way better than tapes).  They think they're cool but they don't know...  did a recording with Howe Gelb and Giant Sand down in Tucson which was mainly done on an old 8 track tape cassette recorder.  What a sound!  It doesn't get better than that!

Anyway, Martin was kind enough to meet me at the Tesco in Swansea and gave me a lift back to his house in Ystalyfera.  As we talked, found out that he knows my friend Barney and my other friend Chris Reynolds, both from the Swansea area.  How crazy is that?

Ystalyfera is a little village down the Swansea valley.  Martin and Sille's house is built on a tall bank that looks down on a large part of the village.  The view from their backyard is stunning.  Across the massive valley below is a large round mountain that reminds me of the Okanagan.  Similar to the Okanagan but somehow different.  The village itself has a lot of Welsh speakers and heard it almost everywhere I went there.  This day was the first of four days of sunshine. 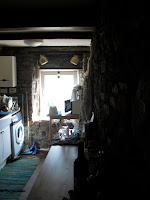 Sille and Martin have an extremely cool house.  It's got three levels, the back door out to the yard is on the first floor, the front door on the second floor leads to the street and on the third floor are two bedrooms.  The walls are thick stone, cute little kitchen and a cosy little dining area.  It's clear Martin and Sille have put a lot of work into the place.  I think they said Martin's Dad helped quite a bit.

For supper we had hummus and dal.  The two of them are fantastic company.  We drank two bottles of wine together, followed by some Estonian moonshine - which may as well be rocket fuel.  It looks like iced tea but tastes like whiskey.  They both love to tell stories, laugh easily and are constantly listening to or playing music.  Turns out Martin played with Boys on the Hill (band from Swansea) and of course I've heard them before.  They're on the Rough Guide to Wales CD for one thing.  The singer in that band is named Andy and has a great voice (Amber really loved his voice so there's a high recommendation!) 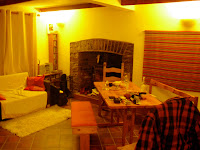 Next day was beautiful.  I sat and had tea out in the yard.  Sille made porridge, Estonian style.  She puts butter in the pot first, then adds milk and oats boiled.  It's served with more butter, salt, pepper and basil.  She even puts tabasco in it sometimes.  Savory porridge?!  I had to try it and it was actually quite good.  A nice change from what I usually do, which is lots of brown sugar and cinnamon.

Later in the afternoon, Sille played a bunch of Estonian tunes.  She sang in a voice that she called "swinging voice" (for a song girl's sing on a big swing) and sheperd's voice.  She usually sings in a very sweet high voice but for this style, she sang full on, throaty and earthy.  The way she sings the consonants almost sound like an instrument rather than a voice.  So incredible!  Completely other worldly!  She also sang tunes which she called "Runic".  They're simple tunes, pentatonic-ish sounding, that loop over and over again.  They sound ancient, and I am transported to another world and another time.

Estonian sounds like nothing I've heard.  Which isn't surprising, considering it's a language not related at all to the Indo-European language family.  Its cousin languages are Finnish and Hungarian (I think called the Uralic language family).  Martin was telling me a little about the history.  I think it was Germany who controlled them first (he also mentioned warrior christian monks settling around, spreading the "word" by sword), then later by Sweden during the Swedish golden age and then later by the Russians.  During WWII, it changed hands a couple of times and ended up being a part of Communist Russia.  Sille described how it was back then, and I can't even imagine such a complete and total lack of freedom.  You weren't allowed to think for yourself and had to watch everything you said.  It's frightening to contemplate.

It's this that makes me happy and proud to be part of the Western humanist tradition... but I digress.


Sille's a real delight and a funny little story teller.  And Martin has got an infectious laugh and is also a proper Welsh storyteller.  What great characters!

We enjoyed some sun, ate, chatted, stayed up a little late.  Martin and Sille played a bunch of great CDs for me.  Tons of new stuff to check out.  Unfortunately, Martin had to work during the days.

On the third day, both Martin and Sille played me a bunch of Welsh tunes.  Martin, his guitar, Sille her violin and sometimes her Hiiu-Kannel.  They're very cute playing together and clearly have a deep affection and love for one another.  They seem to read each other's mind while playing.  They just sound amazing and it was a real pleasure to be privy to their music.  So very sensitive and emotive.

They met while Martin was touring with Boys on the Hill in Estonia.  I think they met at a festival there and they first hung out in a castle.  Then one year later, they got married in the very same castle.  Even for an old cynic like me, that's pretty damn romantic.

We went to a pub that evening, and of course I can't remember the name now.  It had a great Welsh character and they make their own brew there.  Very good dark beer, named after Buddy Holly as the owner is a big fan.
At the end of the night, there was a funny bloke, talking away about the very metrosexual fellow from earlier on. A bit too racy to write about.  But I'll just say the delivery was hilarious.  The woman talking with him had a great Welsh accent.  She kept saying, "No" but the 'n' is really attacked with the 'o' dipping way down and then back up and ending with an 'ah'.  Welsh people tend to talk over dramatically about the most banal things, which always makes absolutely everything extremely funny. We ended the night with a sip of an Estonian caraway liquour but it was far too sweet.

Next day, we went into Swansea and saw this band Lord Elphus and the Amigos.  They played kind of calypso and old Jamaican ska.  They were good fun.  I also met Chris, the other bouzouki player from Boys on the Hill.  Apparently, Chis is from a Romani family.  On this night, he was completely gooned (or twatted as Martin would say) and he could hardly stand.  But somehow, he was cognizant enough to tell the most hilarious stories.  And through the entire night, his wife kept yelling at him to quit swearing.  Oh man!  That was funny!

Swansea has a bit of a bad reputation.  I think it's the number one in Britian for stolen (nicked) cars.  According to Martin, Swansea was completely flattened in WWII and had to be entirely rebuilt after the war.  It's basically an industrial town, and at one time there were quite a number of metal works here.
It's also where the cult film "Twin Town" was based in.  To get a feel for Swansea, just watch that movie (not for the faint of heart), ...and you'll probably never want to visit here.

Again, I was struck by how generous Martin and Sille are.  I recorded two full cassette tapes of them playing tunes for me to check out.  They fed and watered me and gave me a place to stay for four nights.  Amazing and beautiful people.  It reminded me of the old Melba apartments... maybe more on that later...

They asked me to do some more playing with them in the future and I can't wait for that.  Just hope I'm able to play to their level.

Next, onto Llandysul and Pencader...
Hwyl.
Posted by gwdihw y nos at 12:35