Day 18 and 19 - Aberystwyth, Llanbedr and Llanwrda 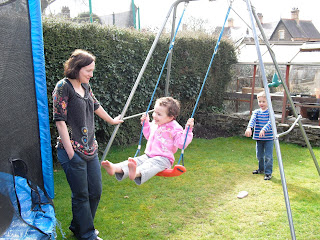 Did some more gardening before it got too wet.  Then made my way downtown and caught a train to Aberystwyth.  I stayed in the local hostel called Maes-y-Mor.  It's real nice hostel with individual rooms for only £25 and just a block off the promenade.

The next morning, I visited my cousin Fran.  Fran is married to Damian Davies and have two kids, Brychan, five and Cristyn, three.  Very nice Welsh names.  The kids only speak Welsh so I did have to speak a little Welsh.  I'm pretty rusty but I'm hoping to get some more practice in soon.  Damian was busy with work (he works up in Aber University and also has a book of poetry published) and Fran was getting ready to go to Euro-Disney.  The kids were really excited for the trip.  Fran is a great writer and editor and is currently free-lancing.  They live in a house named "Ceri" which gives me a laugh.  She actually thinks she can find me a room to stay in Aber so that's cool.
It's wonderful to listen the kids speaking Welsh and probably the cutest thing a person could ever hear.  Both kids have great laughs.  Again, my family here is a joy to be around.

My time was short in Aber as I was on my way to meet Sam in Llanbedr for her poetry reading.  It was fantastic!  It was wonderful to hear her read her poems.  She's got a wonderful sense of humour and at the same time, some of her words are so stark, dark and gritty. 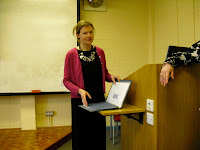 I was really struck by the tones and sounds of the poems as well as the intent of the words.  One poem really struck me.  A poem she wrote to her friend, begging them not to jump.  But the whole message was hidden behind this imagery of her dropping the fine china in a hotel she was staying at.  Her poems have that Welsh sensibility of turning a story from laughter to sorrow at the turn of a dime.  After the reading, there was a short question period.  The first woman began talking about Sam's gothic esthetic and asked some crazy academic stuff.  Sam was great and handled it beautifully.

Llanbedr is a small little town, couple of good pubs, (ate at a little Welsh cafe that served jacket potatoes with beans and cheese) and a little college.  The campus, though small, is very quaint.  There's a remains of a castle beside the reception hall.  The Castle was built by the Normans around 1080 but was burned to the ground by the Welsh within 50 years.  The castle was never rebuilt and all that is left is a large earthen mound. 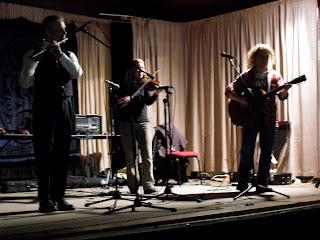 Right after the reading, I caught a cab to Llanwrda.  Not cheap but worth it.  Julie and Ceri hosted a Twmpath.  Twmpath literally means a bump, but it came to mean a dance session.  I've heard two origins for this.  One, means the "bump" in the dance music and step.  The second, means the small mound of earth (usually made of rubbish) just outside the house.  The front door would be taken off and placed on the top of the 'bump' so the cloggers could tap.

The main group was Ceri, Julie, Martin and Sille.  They were, of course, fantastic!  Welsh dance music has some similarities with Irish music but is even quainter.  It seems to have a stronger Renaissance influence as well. 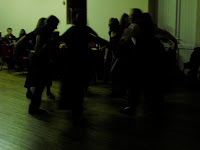 They swapped with a Breton style duo, who played bombarde (basically the chanter  or rather ancient oboe) and accordion.   The dancing was traditional Welsh interspersed with Breton dance.  It was so much fun... mainly because none of us knew how to dance properly.  Martin did a lot of the calling.  Welsh dance is mainly done in formation of groups.  Only a couple of the dances are done as a couple.  Breton dancing is mainly done in one long line.  Everyone joins pinky fingers and the line snakes along in a big swirling pattern.

The crowd wasn't huge but it was only the groups' second time out.  A trend that I've noticed, is that most cultural events are attended by English people and not Welsh.  I wonder what the Welshies are doing?  Watching TV no doubt.  Ceri seems to think they'll only support the artists they see on TV.  Only the really famous artists... slightly perturbing although not unusual as far as world trends go.

In mainstream media, there does seem to be an emphasis on either classical influenced music or male voice choirs.  Strange.  I'm not sure why there's such an emphasis on classical-ish sounding music.

Traditional Welsh music done in a very poor classical imitation style.  I assume it's a hold over from the 1800s but why the Welsh artistic foundation, Welsh tourist board and Welsh assembly think this is a good representation of Welsh culture is beyond me.

There's also a very healthy Welsh pop and rock scene which never gets promoted outside of Wales which is a great shame.

Although upsetting, it's not so bad because I do know there's lots going on all throughout Wales, under the radar of the Man.