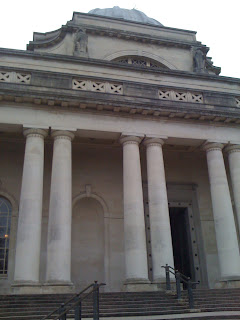 Made a quick trip back to Cei Newydd to pick up my knapsack and then straight off to Cardiff.  The bus driver was astounding today and probably deserved a medal.  He maneurvered the bus through the craziest and tightest roads ever and scraped past semis (lorries) that were going too fast.  Despite his great driving, I have to say the buses in Wales are generally terrible.  They cost too much and tend to double travel time.  They are also hopeless on Sundays and holidays.  In fact, many stores still close in Wales on Sundays.  It's a little bit frustrating.

Melody had set up a level in the fridge just for curries.  Awesome.  Some wine and laughs.  I told her about my weekend.

I walked through the Cardiff market.  It still smells the same as the first time I visited here when I was ten.  There's a fish market at the entrance (that accounts for the smell) that almost always displays a small shark for sale.  It's great!  They also sell laver, a tasty seaweed from South Wales.  A nice Welsh dish is laver bread.  Mix the laver with oats in equal parts, form into patties and fry up.  Traditionally, it would have been fried in bacon fat but since I'm veggie, I just use olive oil.  It's pretty good on toast with mustard. 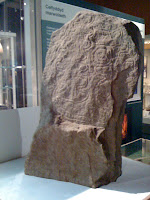 Had my National Insurance Number interview at the job centre.  Was pretty easy actually.  He took a look at my Welsh name and no problems.  Went to the National Museum afterwards.  The Museum here is really great and it's free.  They had a special Celtic exhibit which was cool.  There were some real fine examples of some torcs, jewelry, tankards, shields, weapons, death stones, ogham stone and pottery.  The museum also has a great collection of paintings.  Even a good collection of impressionist paintings.  The sisters from mid-Wales, Gwendoline (1882-1951) and Margaret Davies (1884-1963), were some of the first people in Britain to collect impressionist art.  They eventually donated their collection to the museum.  They were granddaughters of David Davies, an owner of a coal and train company.  The coal industry created Cardiff and much of the city is still from that period.

Myself and Paul once saw Catatonia, (singer Cerys Matthews) in the Coal Exchange. It's an old building where coal from the Bay was literally exchanged.  It had been turned into a music venue but has since been turned derelict.  Very unfortunate.