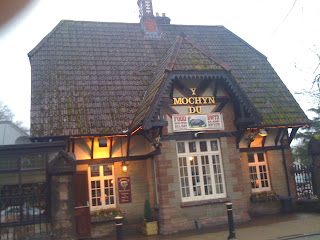 I went to Y Mochyn Du to met Rebecca and Sarah Campbell.  Y Mochyn Du is a Welsh pub just across the Taff river, very near the Stadium and Cardiff Castle.  It sounded as if most of the pub was speaking Welsh.  We ordered drinks in Welsh from the girl at the bar.  I asked her where she was from and she said Cardiff.  A Welsh speaker from Cardiff??  That's new!  Apparently, Cardiff is now 10% Welsh speaking.

Rebecca, originally from Canada, has just moved to Wales.  She met a French fellow who lives up the valleys in Abergoed.  They're planning to get married this summer.  Sarah is from the States and she's here on a Fulbright scholarship.  She's working on an old Welsh medieval play.  The play will be shown in St. Fagans in June; the first time the play has been shown in 400 years!

We met to discuss Cwrs Cymraeg held by Cymdeithas Madog this summer in Cardiff.  We'll be helping on the ground as it were.

Anway, we ended up having to rush to get Rebecca to her train on time but somehow managed it.
Next day, I did some gardening for my cousin Mel.  I turned the soil for her veggie patch, pretty tough going.  The soil was wet and heavy.  It almost like clay, red-gray - at least in the Cardiff area.  Not like Canadian soil that's so rich and dark.  Welsh soil is apparently more acidic as well.

Later in the evening, met my cousin John and we went to The Goat and Major.
John and I always have a great time.  He's good people.  His degree was in lawyering, I think, and he works for the Assembly.  He speaks great Welsh and does lots of translation at his work.  I always thought John was artistic... he used to sing quite a bit and had briefly considered a career in the theatre... so I was glad to hear he's going to be taking some time off of work to do some writing.  All the way until December.  He took a film class last year and made a short film which I can't wait to see.  He's not getting paid for his time off so hope he does alright.  I'm sure he will.

We put back about three pints.  For John, it really was nothing but for me, I was slightly buzzing by the time we left.  Most Welshies can put it back in a rather serious and frightening manner.

John had been to Europe a couple of weeks back and said it was quite cold at -8.  I told him that was shorts weather in Canada!  It is quite humid over here so fair play.

It was good to see John again and hope to see more of him.

Next, onto Aberystwyth, Llanbedr and Llanwrda...
Hwyl.
Posted by gwdihw y nos at 13:12