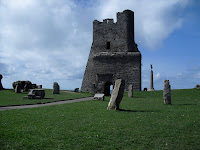 On the Saturday, I learned tunes with Harriet.  Harriet is unbelievably generous, just like most Welshies.  We played for about four hours without even noticing.  She taught me three Irish tunes and worked on some finger exercises with me.  She kept catching my hand positions which are always a bit funny.  She studied the Salzedo style I think.  Elbows high, fingers pull straight into the palms, thumbs up high, fingers pointing down.  Classical style.

There are definite advantages to the classical style that I can see.  At least in theory, it's supposed to keep tension out of the hands.  It also gets a very specific round tone.  To me, it sounds like the difference between the orchestral trombone and my little peashooter horn for jazz and ska.

Classical tones all sound the same to me.  Big, round, warm tones.  Really beautiful but I can't really differentiate between performers.  Jazz tones tend to be bright and/or melodic and/or gritty and/or airy and/or ripping sheet metal and/or fat... you get my drift.  If you're listening to some jazz trombone, you can instantly hear whether it's Jack Teagarden, J.J. Johnson, Kai Winding, Jimmy Cleveland, Jimmy Knepper, Frank Rossalino, Slide Hampton, Bob Stroup, etc.

In jazz, any tone is the right tone as long as it's an honest expression.  I think in that way, it much more similar to punk and ska.

The two approaches of classical and jazz are just different, neither one better than the other.  But I have to admit I prefer the jazz approach to sound quality.  Just my own personal taste... And to be even more honest, I prefer punk ideals.  I really like the idea of approaching the harp with a punk esthetic, if that makes any sense.  Just full on, as if every note's your last.  That's how I wish I could play and sing.

.... So that's my approach to harp.  Which I now realize, is how I approach the trombone.  Get as many different tonal qualities as I can, whatever the method.  Hence the really bizarre hand positions.  Probably also why I play only very simply on the harp.

I think that's why I like Llio Rhydderch so much.  The tones she pulls out of her harp are other-worldly.  For instance, I know that triple harpist generally keep the bottom hand quite low, which gets almost a woody type of sound.  Llio also literally "strikes" the harp strings rather than "plucks" them and she uses part of her nail as well as the pad of her finger.  She also keeps her harps strings on a very low tension which I think gets a nice sweet sound.

This type of freedom of expression is what I find really attractive.  I think I got close to this ideal on the No More Shapes album "Creesus Crisis".  I was really pushed by Jay and Hamelin and got as close as I've ever been to utter outrageousness, pure courage, freedom and honesty.
But I digress...

She's keen on learning some jazz so I taught her a Chick Chorea tune and worked on improv with her.  The tune was Children's Song #1, which isn't jazz exactly but it's a nice groove to improv over.  I don't know if I was much help to her.  I didn't talk too much about theory, just some concepts to try out such as using more space, fooling around with rhythms, that sort of thing.

Harriet is a very fast learner and picked up on everything right away.  She's got a great joy, almost innocent in nature, in her playing style which is nice to listen to.  I think we played most of the afternoon and I showed her some of my homegrown lever techniques... which are basically me mucking about because I don't know any better!

Then I headed back to Cardiff on the train.  You change in Shrewsbury (in England) and eventually, a little over four hours later, you end up in Cardiff.  Went past Welshpool which is close to where Sian James and Parti Cut Lloi live.  Would like to see them all again...

Foothills on the border are quite nice.  Almost like the foothills in Alberta but somehow different.  Maybe gentler, more green, different trees?  I'm not too sure, just different.

The Welsh / English border has shifted slightly several times through history but has been close to the same for nearly 1500 years.  There's a big earthen wall that travels from north to south to mark the border called Offa's dyke, possibly built in 785 AD.

So the Welsh and English have been at it awhile.  The old kingdom here is called Powys and if I was more awake, I'd write a little more about that.

My Dad thinks that Shrewsbury should have been made the capitol of Wales even though it's on the other side of the border.  Probably would be more central than Cardiff.  Quite a few Welshies complain about Cardiff because it's fairly disconnected from the rest of the country.