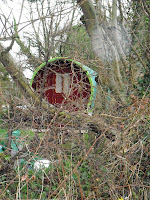 In the history of all the stupid things that I've ever done, today may have been close to the stupidest.
I thought it would be a good idea to go on a coastal path walk on a day threatening snow.  What could possibly go wrong?
It was a cold damp day and I still only had my Black Spot shoes, full of holes, so I put on two pairs of socks, wore my pj's under my jeans, two shirts, my hoodie, scarf, toque and my heavy plaid jacket.  Even just waiting for the bus, my feet were cold.  That's when it started to snow big flakes.  Caught the bus up to Synod Inn (not much there but a pub, and the craziest intersection ever created) and after a twenty minute wait, caught the next bus to Pentregat (gate-town).  From there, I started my walk down the side road towards Capel-y-Wig.  I was still feeing cold so I tried to hitch a ride.  One fellow actually turned around to pick me up.  A real nice English fellow named Frank, I think.  He had lived in Wales for the last 25 years and his little border collie sat at my feet.  He dropped me off at the Romani covered wagon just around the corner from the graveyard behind Capel-y-Wig. 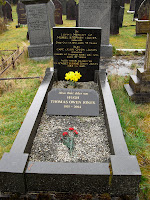 So another visit to pay my respects.  It's always a bit moving making a pilgrimage here.  I make this trip every time I visit Wales.  Sul-y-blodau (Sunday of the flowers) had only been a couple of days earlier so all the graves were covered with flowers.  Sul-y-blodau is a Welsh tradition of putting flowers, mainly daffodils, on the graves.  It was on March 28 this year.  I don't know where the tradition comes from.  Here's a couple of pics.
My grandmother Muriel Steven Jones, my grandfather John Owen Jones (actually buried at sea by Buenos Aires), my Aunty Liz and my Uncle Hugh.
Right beside them is my great grandmother Jane Owen and my great grandfather Captain John Jones.  Captain John Jones was actually buried in Odessa.  He had been in a small row boat on the Black sea, heading back to his ship.  I think the story was, he was too cheap to rent a half decent row boat and it ended up capsizing.  Like most sailors at that time, he couldn't swim.  It was thought that if you were lost at sea, it'd be better to die quickly rather than struggling and dying of hypothermia. 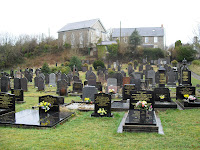 A few rows up from them is the headstone of my great-great-great-grandmother Catherine Jones and my great-great-great-grandfather, Owen Owen.
There are plenty of other relatives here, but the family tree is too big for me to keep track of.
Capel-y-Wig has been fixed up on the inside since I was last here.  Gwalior, the house where my dad grew up, is right across from Capel-y-Wig.  A nice couple named Tony and Gaynor live there now.  They've done a great job of preserving the house and have even kept the spots where my Uncle Hugh had carved his name into the walls.  I simply knocked and they invited me in.  It's always like that a bit.  When I told Sam this story, she said, "That's just how you are Ceri.  You just show up and say 'Here I am!'  I mean that in the nicest way..."  And I know she does, and I know that I'm like that.  I always figure doesn't hurt to try. 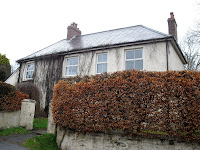 I had a nice long talk with Gaynor and Tony.  It was a nice chance to visit with them and warm up.  We must have talked for nearly two hours.  Tony had a funny phrase to describe Cardiff people, "Poncy gits!"  Maybe not fair but it made me laugh.  Both Tony and Gaynor have been trying to learn to speak Welsh so fair play to them.

The picture to the right here, is Gwalior.
Leaving Gwalior up the lane I walked past Carnowen, the old house of my great grandmother Jane Owen.  The Wig farm is just by there as well and I think the old blacksmith shop used to be near here.  I walked past the Gilfach (now a caravan site) and took the road to the Foel house.  This is the house where Jane Owen grew up.  Her parents were Thomas Owen and Sarah Evans (my great-great grandparents).
The Foel was derelict for years.  Members of my family had tried to buy it back for a long time without any luck.  When it finally did resell, the person living there had to have a priest in to perform an exorcism of the house.  I was reminded of a visit to the Foel with Mel and Paul nearly twelve years ago.  We walked all through the Foel, in ruins.  Even in that state, it seemed like quite a nice house with nice thick walls.  Just as we were leaving, we heard a loud 'BANG' that stopped us in our tracks.  There was literally nothing in the house to go bang.  We all looked at each other, fear in our eyes.  Paul nodded, "I think it's time to go..."  We hopped in the car as fast as we could and drove away like mad.  Erie! 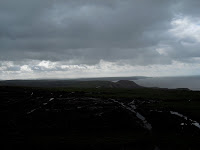 The Foel has been painted bright blue since, which is slightly at odd with the landscape.  After the Foel, I walked past the Cilie farm which once housed a famous family of bards.
I had decided to go to the top of Penfoel.  Penfoel is the spot where many of my family members have had their ashes spread.  It's the highest hill for some miles and just over the other side are black cliffs that drop dramatically in the sea.  To get to the top is quite a steep climb but there is a half-decent path along the way.  At one time, there was a sign at the start of the lane saying "Private".  I remember my Dad seeing this many years ago, and him saying, "To hell with them, they don't own this land!"
Anyway, got to the top of Penfoel and it was extremely windy.
I looked over the ocean and I could see, way in the horizon, a white-gray cloud rolling right over the ocean's surface.  I thought, "That's interesting."  Then I noticed how fast the cloud was moving, at an unbelievable speed.  The fog came roaring in like a massive white-gray grizzly bear.
"Oh, s**t!  Better run boys!"
I took off down the mountain.  There was a voice in the fog, deep and rumbling.  And there was a horrific power that reminded me of the Celtic god of fog, mystery and illusion, Nudd.  I was so terrified, all I could do was laugh. 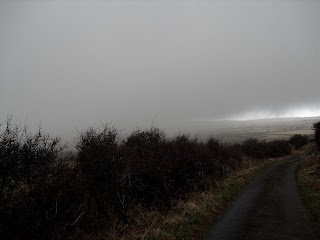 There's a photo here, just before the rushing cloud overtook me.  Right frightening!  And then the hail started, pounding down at me sideways.  I finally made it back to the lane and decided to continue on to Cwm Tydi.
I made it to a path that was in midst of an old forest.  I was completely protected from everything here.  Looking down the lane, with the old trees arching over the road, I felt as if I was going down the rabbit hole.  This road led all the way down to Cwm Tydi (valley of Tydi)
I passed some stout horses and I think I passed by the old house called Penparc.  This house would have been where my great-great-great-great grandparents, Thomas Owen and Margaret Evans, had once lived.  There's not much in Cwm Tydi, maybe about five or six holiday homes.  There were lime kilns here but only the ruins of one are left.  The farmers used the lime on their fields to help with the acidity of the soil. 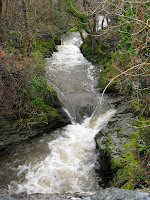 Tom Sion Cati smuggled goods through here, hiding his plunder in the caves along the coast.  Tom Sion Cati was the Welsh Robin Hood, stealing from the rich and giving to the poor.  His real name was Thomas Jones (1530 - 1620) and apparently was a bard born in Tregaron (a village inland, between Aberaeron and Aberystwyth).  He frequently hid in a cave very close to Rhandirmwyn, over looking the Tywi river.  Rhandirmwyn is very near Llanwrda, where I was at the Twmpath.  I remember visiting Tom Sion Cati's cave as a kid and would like to go back if I can.
Many of Tom's work is still available, both his poetry and his work on genealogy.  He was present at the 1564 Eisteddfod as an ordained bard and he was often described as a powerful magician or wizard.
Anyway, the ocean in Cwm Tydi was heaving and I could smell the seaweed.  There's not much of a beach here, mostly stone, and it's almost always covered with seaweed.  The river, called either Afon Tydu or Fynnon Ddewi, was overflowing and bubbling away.
It suddenly got sunny, so instead of going back to the main road, I decided to continue along the coast all the way to Cei Newydd.
I scrambled up the cliff side to the foot path and made my way over the top of the hill.  The footpath was unfortunately very slick and muddy.  Wearing only my Black Spots turned out to be very treacherous, the thin rubber soles affording me no grip whatsoever.
As I slipped and slid down the paths with a sheer cliff into the sea on my left, I truly wondered if I'd survive the trek.  It was a little bit like skiing so I just went with the flow and managed it alright. 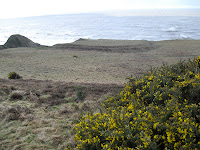 Along the path is the remains of an old iron age fort half of which has fallen into the ocean.  It was probably built to watch for Irish pirates.  The fort has been given the name Castell Bach - Little Castle.  The cliffs here are breathtaking and I touch the ground and commune with the ancestors.  Amazing!
I stumbled down into another valley and crossed the Afon Ferwig, a river that is joined by another river called Afon Soden.  I scurried up the next cliff and - being that it was now such a nice day - had a lay down in the grass and it felt so nice.
As I had said, lots of the path was muddy and slippery and there were many moments when I thought I would go sliding off the cliff so by this point I was getting pretty tired.  Nice chance to relax, take in the clouds and sky with the yellow thorny gorse all around me.
I slowly got up and continued down the path.  Shortly after crossing a part called Craig Coybal, another big blue storm cloud came whipping over the cliffs completely out of nowhere... and it started to snow and snow and snow even more.
"Right.  I outta here!"
I'd had enough of that so, having to walk nearly sideways into the wind, I crossed straight over a farmers field, through mud and sheep dung, until I made it to the paved side road and trudged my way back to Cei Newydd. 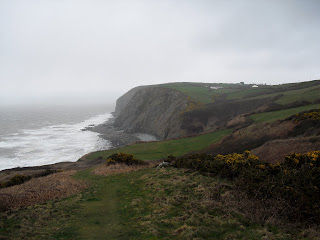 The entire walk back was about five miles or so.  I returned covered in mud and soaked to the bone.  Geraint gave me some pants and shoes to wear and Sam put me in front of the fire.
Later that night, I played boggle with Aunty Susan and Sam.  They had massive long word lists while mine was very small.  I got totally destroyed.  When I told them I walked the coastal path, they were mortified.  Aunty Susan said her hair was already white enough and she was glad she didn't know before hand.

Apparently people have been literally blown off the cliffs in this region.
So there it is.
Very close to the stupidest thing I've ever done!
And somehow, the most beautiful.