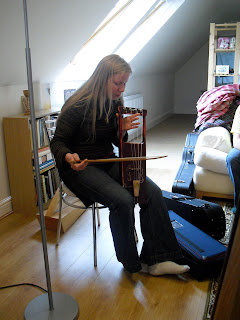 Sille and I were both in rough shape.  I think I was worse off.  Really, my brain never reached a normal functioning level at any point in the day.  Kept waiting for the gears to kick in but they never did.  My stomach was not feeling so hot either.  Harriet invited me to join them for breakfast which was a nice thing to do but I didn't really feel like eating too much.

Once we got going, we had a jam session that lasted most of the afternoon.  Sille played this great Estonian violin called a Hiuu Kannel.  (hope I've remembered that right...)  Violin isn't really what it is, it's more like a crwth or the bowed lyre.  The strings are made of horse hair and is bowed sitting upright in the lap. There are four strings and I think the bottom two are for droning. She uses both sides of her fingers to pull out notes from the strings.  By that I mean, her fingers fit through the strings, one string she uses the front of her fingers and the other string she uses the back of her fingers.  What a gentle sound, the sound of wind and horses.

The front of her Hiuu Kannel has snakes carved in front for a sound board.  She said it was the Snake King which is based on an Estonian legend but she couldn't remember the story.

She and Martin taught Harriet a bunch of tunes and I did my best to keep up.  Martin and Sille have done a great version of "Pwt y Bys" that they put into Lydian mode.  Sounded really cool. 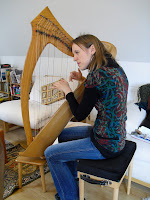 Met Tomos Williams by accident.  I was so out of it, couldn't have made a good impression but hopefully will run into him again.  He's the one who played that beautiful track with Llio Rhydderch on Blodeugerdd.  He lives in Cardiff but Aber is where he's from originally.

Walked through town and remembered what I don't like about Aber.  The shop keepers are rude, like crazy rude.  I guess they're tired of tourists and students (Aber is big university town) but then why be there.  Businesses and service industry types aren't as good as North Americans in this way.  Strange to think now, but I actually appreciate that aspect of North American culture.

We had a bit of a snack for sups and then Martin and Sille had to take off.  I went back to town and had to stay in this hotel called the Marina.  The Marina is right on the Promenade and is actually pretty nice.  Everyone in Wales refers to Aberystwyth as Aber and Machynlleth as Mac, just for your interest.

Off for a good nights rest and hopefully will recover.
Next, a harp lesson with Harriet in Aber...
Hwyl.
Posted by gwdihw y nos at 03:44