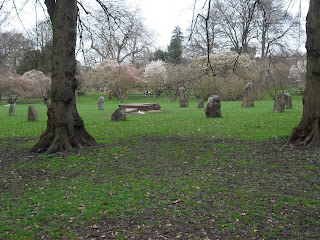 (The picture here is of a druidic stone circle in Cardiff, in Bute park with Cardiff Castle on one side and the River Taff on the other.)

Okay, back in Cardiff (Caerdydd) and finally got my new boots!  Dawgs in Canadianese or Doc Martens in the Queen's english.  And now, I must say farewell to my Black Spots, poor old shoes so full of holes.  Cheaper than brand name shoes and guaranteed no child labour.  Pick up a pair if you can.  And so, an ode to my Black Spot canvas shoes...

Over cliffs we nearly fell - through grass blue
yellow gorse, tales we'll tell,
now there rings the dying bell,
But, oh my, how you did smell!

Good bye my friends, may angels take thee to thy rest!  I was thinking of using Black Spots as a pun on the old name for the area around Cardigan.  At one time, it was called The Black Spot because it was mainly full of Unitarians.
"Some would say we're going to hell..."
A bit over dramatic for a pair of shoes!

The poetic form above is called an Englyn in Welsh.  This particular style of Englyn (there are several types) has 30 syllables (7+3, 6, 7, 7) rhyming the end of each line and usually uses a type of alliteration (called cynghanedd) that doesn't really work in English.  Maybe I'll write more about that another time.

Later I picked up some Welsh cheese, called Y Fenni (Abergavenny).  It's a really nice cheese with mustard seeds in it, that pop in your mouth.  Very tasty!  I went through Y Fenni on the train towards Shrewsbury.  There was a Roman fort built here originally called Gobannium.  It's very possible this is from the old Celtic god, Gobanonos (Gaulish) or Gofannon (Welsh).  Gofannon makes a couple brief appearances in the medieval stories called "The Mabinogion."  The word "Gof" in Welsh still means blacksmith.  That would make the meaning of Abergavenny "mouth of the river, place of the blacksmiths".  Used to be that blacksmiths in Wales were considered magical but more on that later. 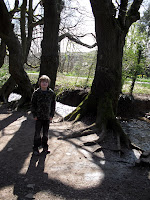 Next day I finally opened up a bank account.  Watched the recorded premiere of Dr. Who with my cousins which was pretty cool.  Dr. Who is filmed in Cardiff and even I recognized some of the locations in the show.

Later in the week I made some cawl and also did some serious gardening.  I cleared a whole new section, trimmed the bay tree and raked a good portion of leaves.  At the end of the week, I went for a nature walk with Cos.  He's very much into nature and bird watching and knows quite a lot about all the different animals and plants.  I think the nickname here for bird watchers is 'Twitchers'.


I figured out why I like going to downtown Cardiff so much.  It does really remind me of home.  I've been going into the new St. David's mall quite a bit.  Even though all the stores are different, it still reminds me of North America.  Isn't that sad?

I was quite hard on Cardiff before.  As Giraldus would say, it's important to describe both the good and bad parts.  So, now for the good parts...

Cardiff has a real cosmopolitan feel.  There are many different cultures settled here.  Many of them have been here for generations, families that followed the coal industry which started in the late 1800s and was really booming by the early 1900s.
For instance, I met a fellow who was part Indian, part North African, part Irish and part Welsh.  He was a funny guy, and he decided to recommend 'mixed' girls as the best to date.

Cardiff has a few streets that they call "arcades".  These are narrow streets, probably old houses, that had the gap above them covered over with a glass roof.  They're a pleasure to walk through as you feel both inside and outside all at once.  The shops in the arcades also tend to be small independent and always interesting stores.

One thing that is bothersome.  On a couple of occasions, you will see a Muslim woman here in the full burka.  All for multiculturalism, but there comes a point where I feel compelled to draw a line.  And that line is humanism.  Human rights should be more important than any cultural or religious baloney.  When I see a woman's rights being so openly denied, so openly crushed, I start to get quite angry.

Oh right, nearly forgot... the good points... I love Cardiff Castle.  It's very interesting to have a castle plunked right in the middle of downtown.  It's my favourite spot in Cardiff.

Cardiff may actually be the original Welsh name for Cardiff.  Er... let me explain that.  The current Welsh name for Cardiff is "Caerdydd", which means "Day Fort".  The idea is that the Roman fort built here (on site of the Castle) in 76AD was named "Day Fort".  This is probably wrong.  The river Taff runs through Cardiff, very close to the Castle, so the original name was more likely "Caerdaff" (Fort on the river Taff) which over the years came to be pronounced "Ca'rdiff".  This would seem to make more sense.

This is where the nickname for Welshies comes from - Taffy or Taffies.  There's also a little joke in Wales about being in the Welsh mafia which is called the 'Tafia'.  People usually use this to describe Welsh speakers as if they have their own little clique.  Might be slightly true... just trying to keep all of you conspiracy theorists nice and paranoid...

Next, another weekend in Cardiff and the Bay area...
Hwyl.
Posted by gwdihw y nos at 12:39