Week 51 - Ystalyfera with Martin and Sille 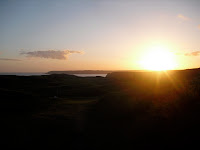 This week was half term so no Welsh class.  I practiced loads and worked on a grant.

Later in the week I caught the bus down to Abertawe and met Martin and Sille in Ystalyfera.  I hadn't played with them in a really long time so it was great to hang out at the house once again.  Of course, I had missed them loads.


We played a bunch of tunes, both twmpath music and Sild's material... and, naturally, ate loads of good food coupled with drinks.   On Saturday we made the trip down to the Gower.  We went straight to some pub to watch the rugby as soon as we got there, Wales vs. Italy, I think.  The game wasn't great even though Wales won.  Wales hasn't been playing very well.  Ta beth...

That evening we played at the King Arthur pub.  It's a very cozy, comfortable place.  Like so many of the pubs in Wales, it's proper.  By that, I mean, it's not a chain and it's not fake like so many of the Irish theme pubs you find in Canada.  At any rate, somehow, we played nearly four hours solid almost without realizing.  We didn't even get through all the tunes.  How amazing is that?  I'm not sure how, but I think, partly it's the joy of playing with these two that the perception of time shifts so dramatically.

Of course, I've already written extensively about Martin and Sille's music.  At the risk of repeating myself, their playing is exquisite... emotive and dark yet delicate and sensitive all at once.  Beautiful to listen to and to be a part of...

The next day we went for a long walk with their friends Helen and Grant.  Grant sings in a rock band with our other friend, Dave "Doug" Morgan.  Helen is a great conversationalist and I enjoyed listening to all her stories.  And of course, the landscape in the Gower is so incredible.  We went past the old tomb again and then quite a bit further.  What a beautiful day.

Martin and Sille have been really helping me to find gigs.  My simple thanks is not enough for all that they have done for me.  Without their help, I'd be back in Canada already with my tail between my legs. I'd written a song about them called Moonshine.  A play on words... I know it's not much, but for now that will have to do as a way to show my gratitude.

Martin's parents were as welcoming as before.  His mom made some very amazing meals.  At one meal, Martin's mom was giving him the gears about his long hair.  That made me laugh!  Parents the world over... Anyway, we didn't party too hard this time around, probably just as well.

Later that evening we went back to Ystalyfera for more rehearsing.

On Monday we played a gig in Cardiff at this pub, Ten Feet Tall.  We opened for an Estonian band called "Weekend Guitar Trio".  I think our set went pretty well.   Martin and Sille are real pros and seemed to remain calm throughout it all.  I think I played better but I do still find it rather unnerving that people in the audience are actually paying attention.  How weird is that?

I really enjoyed Weekend Guitar Trio.  I'm not sure that anyone else did but there you go.  They were a strange mix of jazz, free imrov and  groove based music.  Nearly Third Stream but not quite.  They didn't use sheet music which was impressive considering the tightness of their arrangements coupled with some truly bizarre and interesting time changes.

Sille mentioned that they probably wouldn't have me play with them as much anymore.  Fair enough.  Sild's tunes are already complete, already whole... I wasn't even the icing on the cake... more like the m&m's on the icing, so to speak.  If that makes sense...  And they've already done so much to help me out felly 'na fe.

That night I stayed in Cardiff at Mel's place.

Next, a very busy week, I celebrate St. David's Day, meet Guto, play a gig with Sam and play with Corelw in Llanwrda...