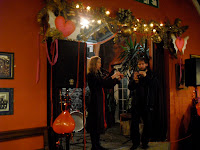 It was a funny week.

I went up to Dolgellau again with Gwil.  Of course, we stopped by our usual haunt, Y Sospan.  Well, it's not looking too clever over at the school.  It's the second time I've been there that they haven't had a space for us to teach.  Gwil was saying that it's happened quite a bit to him since christmas.  I think he was upset about it.  I must admit, I was expecting something like this and wasn't bothered overly.  I don't think the headmaster ever really saw the point.

There's another rather massive problem at the school which the headmaster doesn't seem to notice... but I'll talk about that later.

To be honest, I'd just as soon drop the project.  Some things aren't worth the hassle.  But Gwil seems willing to continuing trying, mainly to keep working for the kids.  We'll see.


After the school debacle, I decided to go to Ty Siamas, in the hopes of finding some private teaching work.  Ty Siamas is supposed to be the national folk music centre of Wales, so I thought surely they'd organize something.  But they don't really, which is fairly odd.  Mind, I've heard they'd lost their funding so that would explain it to some extent.  I met two very nice fellows though, John and Ioan.

John was extremely nice, gave me the full tour of the place and introduced me to Rhian (harp) and Billy (guitar).  He also took my number just in case something were to come up.  Funny, I was speaking to him in Welsh and told him I was just learning.  He was very pleased with that but, not kidding, I'm pretty sure his speech began to speed up.  I found it really hard to keep up.  I understood parts and guessed at others and sometimes was just, "Sori, unwaith eto?"  (Sorry, once again?)

Rhian seemed quite nice, although she asked me if I was self-taught after hearing me play.  At the time I played it cool, but it really made me laugh afterwards.  There was sub-text in that question.  I doubt that I'll get any work passed my way from her.  My technique is folk based rather than classical, unlike most harpers, so there you are.  Oh well...

After reading Trog's new blog, http://troysucks.com/2011/03/06/stylism/, it's inspired me to write more on the subject which I'll post later.


I had a short jam during the week with Elsa but I was too tired to concentrate and wasn't able to keep up with her.

That weekend, Corelw held a Valentine's Day twmpath which was entirely sold out!  I managed to sneak myself in, with my usual sneaky but, hopefully, charming way.  Duw, even mooched a free supper!

The space was very elegant and the perfect place for a dance.  It was the upstairs part of The Angel pub in Llandeilo.  Christine was there and she sat in with the band.  Of course, Corelw sounded great and the dancing was fun as always.  The best part of Corelw is how fluid and natural they sound but at the same time very tight.  Martin did the bulk of the calling but Julie and Ceri also pitched in.

A strange thing happened on the way to the dance.  (Good name for a book, don't you think?)  We overheard some Welsh media personalities chatting... you know, the supposed vanguard of the language... chatting away in English.  All in their very posh outfits.  Quite sad really.  The funniest part of it was Ceri and Julie's reaction... they were remarkably vocal in their distain.  Bwahahaha!  Man, it was great to watch!

Also before the dance, Martin and I watched the rugby in one of the other local pubs, which was much earthier.  Took in some of the local colour, as it were.

There were quite a few people that I recognized there.  I danced this crazy Breton horse galloping dance with Vicky "Ffynnon".  Christine and I participated in a long ways set, I think the Waves of Tory, which our group just couldn't get right.  It was supposed to be a progressive set but somehow Vicky "Ffynnon" and her partner always ended back in the 'dancers' position.  Vicky "Penfro" was there and we later danced a waltz together.  I actually won a free bottle of sparkling wine in the raffle which was incredible.  Unfortunately, Peni "Pipes" was in considerable pain (I later heard she might have tendinitis.  I really hope she's better soon...)

After the dance, Ceri and Stef played a little private set, flute and crwth, really quite beautiful.

Christine told me a wonderful story on the drive back.  I was trying to think of one to share but was completely tongue tied.  Strange, I usually have loads of stories floating around.  I played a bit of harp with the three of them after in Pencader and I also played some trombone, just some improv.  It was loads of fun.  A great little jam session.

The next morning, the three of them played and worked through some new Fernhill arrangements.  It was nice to just sit back and take it all in.


Christine is very definitely moving to Brighton now, after Fernhill's trip to the Netherlands.  Ah well.  She gave me a lift back into Caerfyrddin the next day.  I had a chance to explore the town a bit before catching the magic and secret coach back to Aber.  I used to really enjoy visiting Caerfyrddin when I was a kid, especially the market.

To the side is a picture of her castle and below, a rhyme I once learned about the town.

"When Merlin's oak comes tumbling down, so shall fall Carmarthen town."


Next, I meet Jens in Abergwaun for a recording...