Week 48 - A great session with Gwil and Elsa! 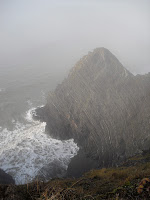 I heard Julie say this at some point, in jest "Don't let the facts get in the way of a good story."  That might become my new motto!

I was back at the Aber folk dance night.  I think I might have tried some clogging which is good fun but hard to do.  I also ran into Buddug in my new Welsh class.  Her Welsh is amazing.  She was saying she's not enjoying Pantycelyn Uni residence (It's the Welsh speaking flats).  For one thing, she's got a straight head on her shoulders and already lived, so to speak, whereas, most of the other students are there just to party.  The other strange thing, she was saying, was that most of the students switch into English almost immediately.  I've noticed this up in Dolgellau in the Welsh language school.  Welsh isn't the predominant language at all.  This is a very bad sign.  End times, I'd say...

But enough of that.  I'll rant about it later, shall I?  Onto happier things...

I finally had another session with Gwil and Elsa.  Elsa took to calling me "Gwal" in emails and it made me laugh hysterically.  She addressed the two of us as "Gwil, Gwal".  It's perfect!  I love the name and hope it sticks, though usually the ones I like don't tend to.

In prep for the session, I worked hard to go through some of our old recordings from the summer.  There's literally hours of material.  It was an unbelievable outpouring of creativity.  I honestly couldn't believe it.  No wonder I wasn't able to keep up with them.

At any rate,  I tried my best to get somewhat organized.  I wrote out a list all the tunes and sets they'd come up with.  That simple list was well over four very full pages!  I learned quite a few tunes and tried to get some of the old sets together again.

There was one recording session that went on for about 40 minutes.  I think there were at least nine tunes all told.  The recording is great because it's basically just the three of us sitting around chatting and playing, trying to figure out how to put it all together.  Gwil and Els kept coming up with all these great ideas but we couldn't quite fit it all in.

I really worked hard to get at least part of the set figured out.  Managed only four of the songs, but I think it worked out pretty nice though.

My playing is still not quite there so was having trouble keeping up.  Gwil made us some nice pizza though and I finally got to hear Elsa play the piano.  Sight reading, incredible classical tunes.  And, of course, when Gwil and Els play together, it is seriously out of this world.

I could blather on about them for ages but as I've already done so...  Well...  You can read about it in the sidebar...  I would like to get them properly recorded somehow.  Just time and money, I suppose... Easy, right?  Well, we'll see...

At some point during the evening, we stopped to listen to the sea news.  Boat news, maybe?  Basically, a weather forecast for ships in different parts of the ocean.  They were both really excited about it... though I didn't quite understand.  Anyway, I think I ran out of steam early-ish, maybe around 3 am or so.  Gwil had to get up quite early the next day as well.

It may have been the following day that Gwil went to pentre fest in Cardiff.  I was going to go but  I slept in something terrible.  Still not fully recovered from the time change and feeling quite sluggish.  As it worked out, that weekend I had another short jam session with Elsa.  She showed me some really beautiful tunes and I think we ate apples and cheese.

There was also a really amazing fog that fell over Aber that week and all the flowers were starting to bloom.  Much better than -25, eh?

Next, a visit to Ty Siamas and I sneak into the Corelw twmpath...