Week 47 - Jet-lagged in Aber and Pencader 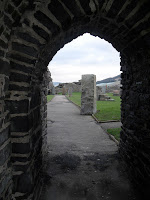 I'm ridiculously jet-lagged right now.  I shouldn't be this bad.  I keep alternating days of sleeping in unbelievably late and then next waking unbelievably early.

I got my hair cut, and spoke Welsh with the hairdresser, Meinir.  She was quite nice to chat with.  I understood virtually everything that was said.  Though I found I was a bit too serious in Welsh... I couldn't make any funny little comments.  But it did feel good to feel vaguely fluent.  Of course, that feeling never seems to last...

I was back at the Welsh classes and started a new class that's at a higher level.  I understood very little but it was a really great challenge.

I worked quite a lot on Julie's tunes and tried to work up some new parts.  I also started transcribing some of the old tunes that I'd always meant to learn and just never found the time.

I saw Damian (Fran's husband) in the street.  It was great to see him.  He's so busy, it was actually the first time I'd seen him since moving to Aber.  We spoke Welsh and I managed quite well for some reason.  He said I was looking very cool, which is funny because I might be the least fashionable person I know. 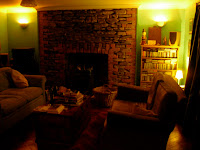 Anyway, later in the week I went to Pencader.  It was wonderful to see Julie and Ceri again.  They're really the warmest people ever.

They're both so animated telling all their sorted stories.  What a treat!  Their son, 'Nei is getting his chain saw license and seemed to be doing really well.  I hadn't really talked to him much up 'til now.  He's got quite a funny, quirky sense of humour.

Julie and I worked on her tunes quite a lot.  Her music sounds so incredibly beautiful.  And that voice!... duw, duw!  What a voice!  Sublime, might be the word I'm looking for but can't even half describe it.  I think quite a few of the tunes are close to completion.  The parts I'd worked on didn't really work but what it did do was help me understand the tunes better.  I think I've found my way finally.

I'd set a distant uncle's poem to an old Welsh carol and Ceri helped me with the setting a bit.  The thing is the Welsh language has very specific accents and rhythms and I was misplacing the emphasis a little.  It's something I still haven't quite grasped but I'm sure as my Welsh improves so will my setting of verse.

I was talking to Julie at one point about tunes.  I think I was complaining about some Welsh tune, and she made the great point that even a really terrible tune can be done artfully.  I think she said something like, "You should be able to sing twinkle, twinkle and still make people cry.  And if you can't, you should just go home."  A bit of a paraphrase but that was the gist.  Of course, Elsa and Gwilym come to mind.  Those two can make any crap tune sound heavenly...

Neither Julie nor Ceri ever seem to stop.  They're both learning and working on new tunes.  It's particularly incredible as they've only just released a new Fernhill album.  One would think they'd just sit on that for the next year or so but they have so much creative energy, they just keep at it.  Amazing really.


AND, before I forget... the new Fernhill album is a must have.  It's gorgeous and enchanting.  I'll write about it more later but in the mean time, just check out the link and please make sure to buy the album and support these great musicians.  Okay?!  Okay. 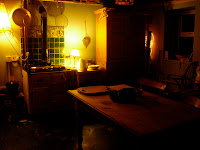 I was treated to a little private concert of a new Fernhill set.  Ceri "Ffliwt" was playing guitar and Julie was singing.  I was awestruck all over again.  Just the same as when I first met them.

You have to remember, when I first met them, I really felt like I was meeting rock stars... not because they acted like that (in fact, they're ridiculously humble), but because I had admired their music from afar for so long.

Julie and Ceri are the one's responsible for and the only reason, I ever thought Welsh folk music could actually sound great... could actually be cool.

I'd searched for years looking for folk music out of Wales that sounded good.  I bought compilations, asked for recommendations... and there was the occasional tune that was really quite good but honestly, nothing entirely grabbed me.  That was until I stumbled upon "Rough Guide to Wales", produced by Ceri "Ffliwt".  That's the first time I heard Julie singing, Ceri playing the pipes... in fact there are a lot of great 'firsts' for me from that album (more on that later)... nearly every track is incredible to listen to and a complete joy.  It's an artfully crafted album.

And that's Julie and Ceri.  I mean, they did go to art college and that really comes out in their approach to music.  Everything is creative and artfully done.  And human, and ancient and modern all at the same time.  I know, I know... I've already written lots about them before but I need to bow once more to them and say thank you.

Diolch o galon!  I thank you with all my heart for everything!

Well, there it is.


Next, another great session with Gwil and Elsa... at long last!!