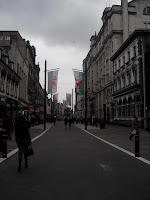 I had wanted to celebrate St. David's this year in the actual St. David's but I had stayed in Cardiff after the gig with Sild.  I figured the capitol would be just fine.  On my way downtown, the bus driver said, "The route's changed today.  I guess there's some sort of march on."

So that wasn't a good sign as the "march" he was referring to was actually supposed to be the St. David's parade.  Needless to say, the "march" was very meagre.  Not too many Welshies take to the holiday I guess.  Fair enough.  I suppose it's more for ex-pats and us foreigners.  Shame.  I used to really enjoy handing out daffs and eating welsh cakes.

I had heard there was a choir at the Library so I headed over there.  There wasn't a choir, it turned out, but Guto Dafis was there performing.  I had heard loads about Guto before and had listened to his music on "Rough Guide to Wales" and on an album called "Megin".  He's a great squeeze box player.  For this particular show, he was doing a mix of story telling and box playing.  He was brilliant!  Very good story teller.  He did everything in both Welsh and English, which I really enjoyed.  He told some classic Welsh folk tales and also tackled the second half of the first branch of the Mabinogi.  The story of Pwyll and Rhiannon.  A very hefty and wonderful story which he pulled off nicely.  I'm glad he's brought that story to modern listeners... can't have it sitting in the dusty desks of scholars...

I introduced myself afterwards and he said, "Oh yes, you're the one that writes those blogs."

Bwahahaha.  Now there's ridiculous.  Would much prefer to be known for my harp playing than my blogging but there it is...

It's always a bit strange when someone tells me they've read my blog.  Of course, it's flattering at the same time.  I would have loved to talk more to Guto but he was on his way to visit the Gododdin manuscript that was on display in the Library.

I had considered staying at Mel's an extra day but they were quite busy, so with a gentle push she sent me on my way.  She very generously paid for my taxi and bus trip!  There's nice!

On Thursday I went over to Cei Newydd to play a gig with Sam.  Nigel the owner was very interesting.  Great fellow.  He had these crazy stories about when he and a load of others were living in some subway station in London... Paddington Station, I think.  The working homeless with suite and tie and all.

The restaurant was packed and Sam was great of course.  I love how she reads her poems, very crisp and the cadence is gorgeous to listen to.  She's written a slough of new poems about the Antarctica.  I immediately fell in love with her new material, which are due to be published next year.

I played mainly harp and a little bit of trombone.  The trombone didn't work as well.  I'm just not as into the trombone these days.  The harp stuff went alright though.  There were times where I was completely in the moment and I think I managed to capture the spirit of the poems.  There were some that didn't work quite as well.  Generally, those were the ones where I fell back on a tune I knew rather than free improv. Anyway, I would love to have another try at it.  Hopefully.

Julie and Ceri "Fliwt"'s mom came to the show.  Sam was thrilled to meet Julie.  She'd seen Fernhill at Oxford about ten years ago and had loved the show.  Elsa was there as well with some friends.  She's so supportive!  Anyway, that night I went back to Pencader.  Ceri's mom gave me a massive compliment and compared my style of playing to Llio's.  Duw!  That's absolutely massive.

The next day we were due to play with Corelw in Llanwrda.  Peni and Stef couldn't make it so they asked me to sit in.  For me, it was nearly an anniversary.  A little less than a year earlier I had seen Corelw play for the first time, in the exact same hall in Llanwrda.  A year later, here I am playing with them.  Sweet!

There was a decent sized crowd.  A bunch of young foreign exchange students that had worked with Jason were there dancing away.  Martin was fab at the calling.  Not an easy job at all.  Especially as many in the crowd lacked the english and some were truly cursed with two left feet.  I played a nice set with Jason and Ceri "Ffliwt" which I really enjoyed.  The tunes that Corelw play and the manner in which they play them, make them stand out from other bands.  Julie sang a great a-cappella Breton tune while she danced along.  Brilliant!  Sille ended the night with some hurdy-gurdy.  It was a seriously good night.

I met Ceri and Julie's friend Kate the following day.  She was an absolute riot!   What a sense of humour! ...with no subject off limits.  I later rehearsed with Julie a bit.  At some point I visited Telynau Teifi to see their new pedal harps.  But turns out, they've decided not to release their own and simply sell Pilgrim harps instead.  I don't think that's a good idea but whatever.  The "Telor" is still the most beautiful harp I've ever played.  I tried to get financing to buy it but of course was refused.  Self-employed musician?!  As if!  That's always been the story but this time is especially fair.

I played some more with Julie on the Sunday.  I also talked a bit of Welsh to Julie which was cool.  My Welsh has stepped backwards in a serious way.  Ceri "Ffliwt" wasn't into it but I understand why.  It's that feeling... the same feeling I had about playing for Kate and previously for Grant and Helen.  If it's not natural, I don't want to do it.  Any hint of showing off and I'm out.

It reminds me of when my Canadian friends want me to say something in Welsh.  I know they mean well and are just really curious, but it always seems a bit as if Welsh and I are side-show freaks or something.  Anyway, I love the Welsh language and very simply wish I could speak and understand it better.

Maybe I'll write something about that struggle another time.

Right, next, I watch an anniversary fly by...