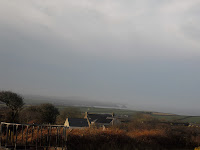 I caught the bus all the way down to Abergwaun to meet Jens Schroeder and his friend Andreas in the Royal Oak Pub.

A short story about the Royal Oak... This was the pub where the French attacking force, La Legione Noire, signed over their surrender after the Battle of Fishguard in 1797.  The Welsh women of the area were said to have played a major role in the battle.  If I remember right, the women marched around the hill, past the cliffs, in a wide circle... and with their tall top hats and red dress, looked very much like part of the British army.  To the French army below, it must have looked like a massive opposing force, a never ending march of British soldiers.  One Welsh woman is remembered in particular, Jemima "Fawr" Niclas, for single handedly capturing twelve French soldiers, wielding only a pitchfork.

And where were the men?  ...Probably having a pint in the Royal Oak!

Just kidding... apparently, the Pembroke Yeomanry was the first volunteer unit in Britain to be awarded a battle honour.  The Battle honour 'Fishguard'.

Anyway, Jens was the recording engineer on the international award winning Blodeugerdd album.  He'd agreed to record a short demo for me.  I hadn't seen him in over two years so it was good to catch up.  Jens has great ears and also a great sense of humour.  He's got a cool little studio on his farm called Dreamworld Studio.

That evening, after beer and Thai food, we listened to this Indie band called Tunng.  A cool sounding band, electro-folk might be the way to describe them.  They had a similar sound to Postal Service.  We also listened to Llio's new album in it's entirety.  Holy... duw!  She's created something unbelievably extraordinary.  Tomos 'Trumpet' is on the album as well.  I'm not sure when it'll be released but definitely worth looking out for.

Llio might be the last sole inheritor of the Welsh triple harp tradition.  Oh, I know, I know.... you're going to start citing me this person or that person...

Well, you can hear, in Llio's playing something that I've never heard before in any other harpers approach - in tone, attack, style, esthetic... she plays with fluidity, grace and complete freedom. Llio uses very lightly strung harps, plays with a hand position I've never seen before, uses a combination of finger pad and finger nail which is quite unique, she strikes the strings rather than plucks them (much different to the classical harpers) and she improvises... free improv.  Even when she plays some of the old Welsh "standards", she's much freer within the music.  She plays with an emotive soaring esthetic that I've yet to hear replicated by anyone else on the harp.

I'll tell you this, she's one of the only harpers I listen to on a regular basis.


But I digress...
I think Jens said he moved from Germany to Wales back in 1994.  He was playing with some type of rock band.  Andreas also used to play in a rather successful pop band but now, is a psychologist.  He still plays quite frequently with a band back in Germany.  I think he visits Jens every year.  Of course, they're both very insightful and quite interesting to hang out with.

I crashed at the farm that night, slept in the front room.  Andreas was trying to make plans for the next day and asked Jens what time we'd start recording.  Jens said, "Well, some point in the morning."  Andreas, "What time do you think then?  Nine?"  Jens replied, "Well, let's try not be too German about it."

Jens, of course, is a great engineer and his farmhouse is the perfect place to play.  It's incredibly beautiful and inspiring out there.

The next day, I was way too excited and couldn't stop myself from playing.  I had all this music I wanted to get out but not enough hours in the day to do it.  For some reason, I thought it'd be a good idea to record nine sets of tunes in the one session.  Mixed and mastered all within the day.  I could have used a producer to tell me when to take a breather or when to try another take.  I probably would have been better off to get three really good takes instead of nine mediocre ones.

I'll post the recording later to Bandcamp.  It's not a perfect performance by any stretch.  I suppose, it sounds human at least.  But that's how it always is with recordings... a snapshot of a step along the journey...


The following day, I met Sam for a quick rehearsal.  Then, we went over to Fran's and had an equally quick visit.  They're both so very busy.

I had trouble understanding Catrin that day.  She was speaking with Sarah in Welsh, very fast.  I get extremely frustrated with myself when I can't understand native speakers.  It drives me nuts that I can't speak Welsh properly and, side note, it drives me even crazier that I can't pronounce my own name properly.  I wonder when or if I'll ever be fluent.

Next, a couple more gigs with Sild...