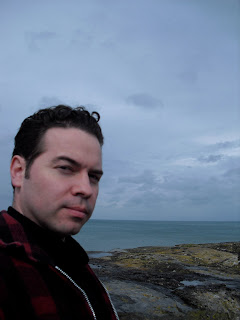 Woke up in Pencader.  I was definitely still drunk in the morning but never did get that hang over.

Finally made my way to Cei Newydd and chilled out with Sam and Geraint.  Here I am on the Cei Newydd pier wall.  I like this photo because I look quite a bit like my grandfather.  I'll post his photo later when I get a chance.

Sam had another poetry reading, this time in Caerfyrddin.  I had thought about living in Caerfyrddin (Carmarthen) and decided to join her.

Caerfyrddin is supposedly the second oldest town in Britain.  It's the site of the old Roman city (civitas) that was set up for trade with the Welsh tribe, the Demetae.  The area called Demetia is the Romanization of the name Dyfed.  Dyfed is the old name for West Wales, which includes the counties of Caerfyrddin, Penfro and Ceredigion.
My family is from Ceredigion, and seems to have moved around the area from Cei Newydd, Cwmtydi, Llantysiliogogo and Llangranog, making my old tribal name the Demetae.  Not far out of Caerfyrddin is the old Celtic iron age hill fort where it is said that Myrddin (Merlin) sleeps.  This fort is massive and is thought to have been the primary seat of power of the Demetae.  The old Celtic name for the city was Moridunum.  Dunum meaning fort (earthen circle works) and Mori possibly meaning sea.

There used to be an old petrified oak in Caerfyrddin called Merlin's oak.  The poem went something like this, "When Merlin's oak shall tumble down, so will fall Carmarthen town."
So, the town council thought it'd be a good idea to tear down the oak to make room for a better road.  How idiotic!

Anyway, Caerfyrddin is built on a river that leads immediately out to sea, a perfect trading town.  It's possible the blue stones (taken from Preseli mountains) were delivered to Stone Henge on this river.  Welshified, Moridunum became Myr-dyn (dynas in modern welsh means city).  This then became associated with the bard / druid Myrddin which can also mean "ocean man".  The "Caer" at the beginning means that a Roman style fort had been built here.  There is no mention of the Demetae actually fighting with the Romans so they might have struck some sort of treaty.  I've often thought most of the Roman roads in West Wales were not necessarily built by the Romans, simply the craft was adopted by the native inhabitants. 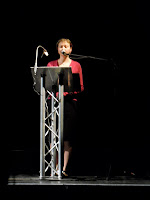 Sam did another great job at the poetry reading.  It was a strange little event held in a very quaint theatre.  The poetry was interspersed with modern short film and avante guarde music.  Menna Elfyn also read.  She's a fairly famous Welsh poet.  She write mainly in Welsh and has had her work translated.  I had seen Menna before over satellite in Ohio while I was at Cwrs Cymraeg about five years ago.

Sam was maybe the best of the evening.  The couple of avant guarde music groups are not really worth mentioning.  The last group was almost good.  Some of their stuff had a nice ambient sound but they were too often self-conscious and made lots of mistakes (or rather were clearly ashamed of their mistakes).  Their lack of conviction really ruined the music unfortunately.  It was almost good.

If you're into crazy improv new music then you should check out "No More Shapes".  Cool group I was playing with in Calgary.  Eric Hamelin (drums) and Jay Crocker (guitar), myself on trombone.  It's a great group and I'm pretty proud of the album we made.  We recently had an article in the New York Times which blows my mind. I'm sure you can get the full album online somewhere... but I digress...

Even though I still find Caerfyrddin intriguing, I must admit, Aber is a much nicer looking city.

Next, I do something truly stupid... a coastal walk in the snow!
And more on Capel-y-Wig, Penfoel and Cwmtydi...
Hwyl.
Posted by gwdihw y nos at 16:53