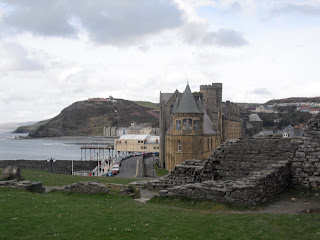 Today, I went back to Aberystwyth to see Harriet.  Harriet is a fantastic harpist, very virtuosic.  She mainly plays Irish tunes, but really can play almost anything.  Turned out she was having a visit from Martin and Sille.  Third week in a row to run into them.  They're all great people so I was really looking forward to seeing them again.

Tough to get to Aber today.  Eventually made it.  The bank holidays are the worst for getting around on public transport.

I visited the Aber castle briefly.  It's in complete ruins, blown up during the time of Cromwell.  In the distance, you can see Pen Dinas, the old iron age fort.  Probably created to watch for Irish pirates and to do trade, like most of the forts on the coast.  It's extremely large and the name actually means 'chief city'.  Probably not it's original name.

There's also the old college down on the promenade (the original Hogwarts!) and within the castle is a modern stone circle, constructed in 1916.  The stone circles are put up in every place that is host to a National Eisteddfod.  Then the druids hold a special ceremony in the circle to open the event. 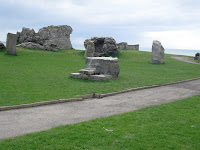 I called Fran today as she was just back from EuroDisney.  She was too busy to see me and fair enough, she must have been extremely tired from her trip.

I was feeling particularly lonely today and slightly homesick.  Of course, I miss everyone back in Canada.  It's pretty tiring traveling around with just a knapsack and I was really feeling weary.

After checking into Maes-y-Mor again, I went to meet them at Rummers, a pub near the castle, to see an old trad jazz band, I think called Aber-jazz.  The band was pretty good and were really good fun.  The drummer was 84 years young and knocked it out.  The bar was crazy busy and loud.

Briefly met Catrin Finch, the premier harp player of Wales.  Harriet is an acquaintance of hers so I got to shake her hand.  The one CD I heard of Catrin Finch was beautiful.  It was slightly on the experimental side, and she put the harp through some guitar pedals to great effect.  She's a little more on the classical side of things in general and just great player.  I think she was the harpist to the royal family but I'm not sure.

Had a blast with Martin, Sille and Harriet.  More laughs and great stories.  I forgot to mention earlier that Martin wears proper plaid, and worn properly.  I don't remember much of the evening, just that we had a good time.  Martin kept buying the drinks.  Of course, I drank about two pints too many and was very gooned!  Harriet doesn't drink, I think Sille drank a little more than me and Martin can really put it back... just like a proper Welshie!

I ate a pizza on the way home, stumbling away and crashed hard that night.

Next, more in Aberystwyth, and jamming at Harriet's house...
Hwyl.
Posted by gwdihw y nos at 03:29