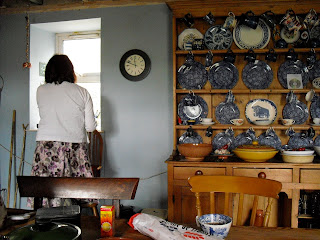 The best day in the history of best days!

It all started with a nice breakfast of left over lemon cake.  Ceri and Julie only recently got a new oven so Julie's been baking lots of cake (or pwdin (pudding) as they say over here). It's a fantastic old looking oven, heated with wood.  It's also used to heat the entire house if need be.  Their house is a proper Welsh house as well.  The oven on one side, on the other the plates and cups are displayed on an open dresser which is very traditional Welsh.  Nothing's hidden.  In the front room is a wood burning stove to keep warm in winter.  They have a piano, flutes, mandolins, guitars and books in the front room.  It's a cozy warm house.  Not temperature warm... just warm and comfortable...

All houses in Wales are just slightly cold, temperature wise.  People here layer up rather than turn on the central heating.  Very unlike Canada where resources are much cheaper.  I've kind of resigned myself to being cold and damp, that's just how all the houses are here.  Of course, Julie and Ceri don't even have central heating.  Again, proper Welsh... People here also burn wood and coal in their fires.  My cousin Sam does this as well.  You would think the smell would be awful but it's actually quite pleasant and reminds me a little of the smell of peat.

At any rate, Julie and Ceri were without an oven this winter, so they absolutely froze.  Also, the houses here have to breath so without the heat, they said there were literally big pools of water everywhere inside the house.  Part of their house is made of 'clom' which is the old way of building houses.  'Clom' means clay.  Maybe I'll say a word about that later.

I chatted with Ceri and Julie about were to live.  I had been playing with the idea of staying in Carmarthen and commuting into Cardiff regularly.  Ceri said Carmarthen's alright but was built as a cattle town.  He also said if one wanted to be completely brave, they would move to Aberystwyth.  Definitely convinced me!  There's a good Welsh folk music scene in Aber as well as the National Library, a good resource.  Then Julie and Ceri told more great stories.  They've traveled everywhere playing music.  Africa, the Middle East, Japan, Canada and all over Europe.

Recently, they've been playing a lot in Belgium.  They said the food, beer and chocolate are over the top in Belgium.  Very fine.  The best in Europe.  Ceri R. has been teaching in Dolgellau lately.  Teaching kids how to build flutes and how to play them by ear.  It's a labour of love for sure.  He's trying to create a very long term project for the town.  Dolgellau is the place where the wooden flute first came to Wales and flutes were built there for a time.  Each student, he teaches to make a plastic flute and then gives them a tree to plant.  The idea is to have pile of trees down the road that can be used for the townspeople to make their own flutes again and reintroduce the tradition.  Ceri asked if I'd be interested in teaching a class for the harp in the fall.  What an honour that would be!  There's also a session up in Dolgellau that Ceri runs so I might follow him up there near the end of April.

Julie and Ceri told many more great stories.  They love to talk about Welsh culture and history but the main focus is on music, music and more music.  They have encyclopedic knowledge of all kinds of styles of music which is always refreshing.

A little after lunch, I called up Allan Shiers from Telynau Teifi, Llandysul.  Told him I was jamming with Julie and Ceri R. and asked if I could rent a harp for a couple of days.  He graciously loaned me the harp free of charge.  What a cool guy! Finally got to tinkle away on the harp for awhile.  Had a quick jam with Ceri on flute.  He's gets a nice warm tone which is very emotive.  The timbre reminds me of a bird, maybe a red kite.  Not literally like a chirping bird... but rather like the smooth graceful gliding on the wind, sharp eyed, joy and freedom of the red kite.

Shortly after, Sille and Martin arrived.  They were really welcoming to me and complementary to my track on the album.  Which they didn't have to be.  I really believe their track with Julie is the coolest so there it is.  Both of them are great story tellers and enjoy a good laugh.

Sille is from Estonia and has only the slightest hint of an accent.  Estonian language is very unique and related to Finnish and Hungarian but not related to the Indo-European language group.  She's a very lively, energetic and sensitive musician and person.  Martin is from the Gower peninsula originally.  He's got the best sense of humour and is one of the most intelligent people I've met.  He plays guitar almost as if it's a harp.  He outlines melodies and chords in such a beautiful way.  Where Sille is like a wild horse, Martin is like a standing blue stone or a big friendly bear, always supporting what's going on around him with complete sensitivity yet so solid.  Even though I didn't know any of the tunes, what I was able to play, I think we really complemented each other well.  Of course, I wasn't really able to keep up but it was fun to try.

Sille was making fun of Finnish people, which in Estonia, is the the thing to do.  Mostly about their eyesight for some reason.  Sort of like Canadians vs Americans I guess.  We also talked about about hockey (ice hockey) because we both come from Northern climates.  Estonia got down to -27 this year, and if I've remembered right we got down to -35 at one.  Ha, we win! ...or lose, rather...

We also had a laugh about how short we all are.  What?! Welsh people, short?!  Never!

I played them my lament for Danny and a couple of tunes from the Robert apHuw manuscript.  Robert apHuw being the oldest harp manuscript in the world AND it's Welsh.  The person to check out for this music is Bill Taylor, an American who lives in Scotland.  I really like his interpretations the best although there is another fellow named Paul Dooley who's very good as well.

Between the five of us, we drank through six bottles of wine.  And we jammed through the afternoon and again after supper until about 3 in the morning.  It was the longest and maybe the best jam I've ever been to, and I've been to some good ones.  Proper music, done properly.  That's the way it should be.

Julie sang a version of St. James Infirmary that I hadn't heard before.  I'm mostly familiar with Jack Teagarden's version.  She learned this version by listening to Doc Watson.  When she finished, there was nothing to be said, other than - 'yeah'.

When Julie sings, the world stops...

Ceri R. kissed us all good night and then we all went to bed with tunes and wine swimming in our heads.  Bendigedig!

Next time, the epic session continues...
Hwyl.
Posted by gwdihw y nos at 13:51