Day 46 and 47 - Practicing in Aber, drinks with Idloes 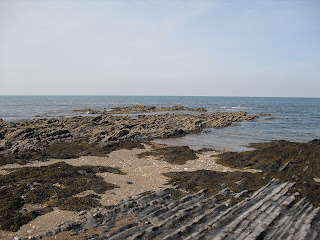 (Part of the beach at Aber, the tide is low here)


I've been practicing like a madman.  These tunes are destroying me.  Completely at the edge of my abilities.  What a challenge!  Worked hard to get the tunes up to speed and learned a few more tunes.  I haven't even got through one side of one tape yet.

Get up, practice.
Late breakfast.
Walk to the beach, take in the ocean.
Climb the cliffs.
Find my seat beside the Tylwyth Teg homes.
Back down for more practicing.
Make supper.
Listen to some new music.
Chill out.

I want to be ready for the next time I meet with Martin and Sille, so I've got to keep it up.  I've lost my callouses on my fingers, so they're pretty sore and blisters are starting to form.

I went for a couple of pints with Idloes.  We went to a pub on the promenade and watched the sun set over the ocean.  He's a very good hearted person.  A carpenter by trade, he also has a farm of about 100 acres where he keeps sheep and lamb and he sings in a choir in his spare time.  He had stopped singing for about seven years but now he's back at it again.  He used to sing with a male voice choir and Catrin Finch accompanied them when she was about 13 or 14!  He said they used to pack halls regularly and he said she was a wonder and inspiration to listen to.

He talked about Welsh music and the reason for it's sound.  "Welsh people have had to fight for everything they've got."  There's so much loss in Welsh history.  A deep sense of loss runs through Welsh music.  A sense of things as they might have been.  He was also talking about how quite a few English people have moved here and actually have learned to speak Welsh.  He was very excited about that.  His daughters go to a Welsh language school (he speaks Welsh wrth gwrs) and his wife is English who learned to speak Welsh.  He's very proud of her...  Very cool.

Something's struck me, and I might write about Flea in a little while.