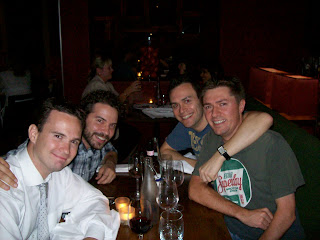 (This picture is a couple of years old - left to right, Ceri Mutual, Ceri Harp, John "JC" Rhydderch and Iestyn)


I met John in town on Saturday.  Bought him the Artist's Way, a book I'd recommend for anyone.  Thought it might be helpful for his writing.  Parts of it are a bit too religious for me but on the whole it's been very useful.

Stopped by his flat briefly.  It looks very similar to the last one he was living in.  Very nice place with a beautiful view of the river.  He lives down in the Bay area which has been built up quite a bit.  Lots of new condos and lots of new shops and restaurants.  The area used to be referred to as Tiger Bay which included the Cardiff docks and Buttetown.  It was here, during the coal rush, that all the migrants settled and mixed which continues to give Cardiff it's metropolitan feel (apparently some 45 different nationalities).

The Bay area also houses the new Welsh Assembly (giving Wales a small measure of autonomy) and the Millenium Centre (big theatre for opera and classical music).  We went to a bar (can't remember the name) near the old Norwegian church which was built in 1868.  It was built for the Norwegian merchant fleet.  The church was closed in the 1960's but was reopened and fixed up in the 1990's.

At any rate, the sun was shining so we had our drinks outside.  John's friend Iestyn was there with his girlfriend, Helen.  Helen is from Yorkshire and has a very flat nasal accent compared to the Welshies' sing-song accent.  She was very nice and they both work in Bristol at the moment.  Also met Iestyn's brother Caradog, nicknamed Crad.  Caradog plays classical piano and accompanies opera singers at the University and gigs around town.  He's also a fiddle player and plays with a Twmpath band (Welsh folk dance band).  It was great to see them all.  Iestyn is quick to laugh and a real warm hearted guy just like John.  Caradog was very cool as well and took my number for possible harp gigs.  The three of them are from Llanelli and speak very good Welsh.

After, we went to Bar Cwtch for some pizza and then finished at a pub called Eli Jenkins.  Bar Cwtch is a quaint little basement pub.  Cwtch (or cwtsh) in Welsh means 'to cuddle'.  The original word referred to the little cubby hole underneath the stairs that little kids would climb into to be cosy.  That cosy feeling of the word was then used to mean "cuddle".  It's even been accepted in England.  People in Wales always say "Come on, cwtsh up" or "give us a cwtsh".  I used to have a t-shirt that read "Cwtchman".

I should also mention that their other good friend wasn't there.  His name is Ceri as well.  Too many Ceri's...  Martin started referring to Ceri Rhys as Ceri Flute, me as Ceri Harp, Ceri Ashton (girl on the Blodeugerdd album) as Ceri Clarinet, and I suppose I'd call John's friend Ceri, Ceri Mutual Fund, cause that's what he does.

The night ended fairly early, nothing too crazy.  We've all hung out quite a bit on my previous trips so I feel very close to this crew.

Next day, I mainly just relaxed and helped Paul a little more with the green house.  We finished the frame which was the main job.  Mel's garden is starting to look really good.

I should mention, Paul is really into music, particularly punk.  He was a big punk in the 80s and I love that he hasn't lost that side of himself.  We always have that as our meeting place.