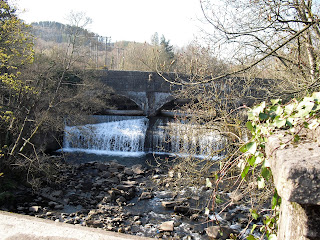 One more word about Sild.  Sild means 'bridge' in Estonian and that's exactly what the group is.  Their two CDs literally bridge Welsh and Estonian music as well as traditional and modern experimental.  It's a great sound, very atmospheric.  I love these CDs ('Priodi' and 'Tro') and think that everyone back in Canada should search them out.
Probably good to go to the Fflach site.  http://www.fflach.co.uk

I had to get up early in the morning in order to get to Llandysul.  Martin gave me a lift to Neath (THANK YOU Martin!) ... it would have been tough going otherwise.  Caught the train all the way to Carmarthen and then a bus to Pencader.  I was on my way to meet Allan in Llandysul and decided to make a pit-stop at Julie and Ceri's.
Their sons Nei and Rhys were there. Rhys is going to art school in Leeds and was just home for the Easter holiday.  It was really good to see him again.  A really good dude, a sharp mind and remarkably together for his age.  He's mainly a graffiti artist but, like his parents, has a good understanding of all the arts.  I was a mess at that point in my life so good on him.

Julie drove me to Allan Shier's house to pick up the harp.  He has a beautiful little spot near Capel Dewi, just outside Llandysul.  It's a little bit of paradise, situated in a small, tucked away glen with a bubbling little stream running right beside the house.  We sat and visited with him and his wife, Gwen.  They're good people.  What an amazing afternoon.  The harp they had for me is made from cherry wood and is extremely new.  It needs to be worked in a bit but it's a beautiful harp.  It's called the Gwennol, which means the "swallow" in Welsh.


Ceri Ffliwt had a gig that night with Martin and Sille so Julie and I jammed most of the night.  Right until about midnight.  She's written some incredibly beautiful tunes.  She played them on piano.  Her tunes have really sweet and colourful chords.  The melodies were gorgeous and coupled with that voice of hers, made for a magical sound.

As I've said before, when she sings, the world stops.  ...the voice of the silence just before dark...


I really wasn't able to add very much to the tunes.  I was being too busy I think, trying too hard.  Hopefully, will have another shot.

The next day was fairly chilled.  I played some harp as I was itching to.  It'd been awhile since I'd had a proper chance to play.  I came up with lots of ideas for tunes (I thought they were all good, but looking at my notes later in the week, there was maybe only one good idea...)

Julie made a great sunday lunch.  I'm such a mooch, I really do owe them some meals.  Actually, I owe them more than just meals and hope I can someday find a way to make it up to them.  I got a lift with Ceri and Rhys back to Aber.  Rhys was catching a train from there back to Leeds.

That evening I got settled into my new home with my new harp.

Next, staying in Aberystwyth, the ocean, finding my seat and playing the harp...
Hwyl.
Posted by gwdihw y nos at 15:33