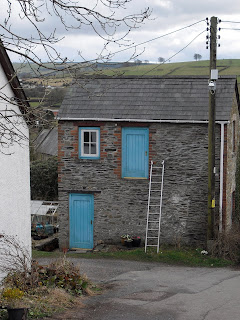 I went back to Pencader with Julie and Ceri after the Twmpath. Had another great day with them.  Julie cooked more great food as she always does.  I was supposed to go back to Cei Newydd but we got into a bottle of gin...

Actually a great big massive bottle of gin.  And we finished it entirely!  Ych a fi!  I may have woken up the next morning still drunk...

Ceri told this great story about a trip to Yorkshire that involved three country pubs, a stripper and a bare-knuckle fighter who fortunately liked Welshies.  Too long to tell now, but great story.

They also told me this story about a Japanese flute player who mastered all the flute styles from all the Celtic countries.  He's become famous in Japan and puts on shows with Japanese girls dancing Irish style better than the Irish.
He had visited them in Pencader and decided that to embrace Welsh culture he had to eat mounds of cheese.  This was his pattern.  When he was learning Irish music, he decided to embrace Irish culture by becoming alcoholic!  At any rate,  they went on a trip to Llangranog and, because they were were proper Japanese (bowing and apologizing every other minute) and after eating all that cheese and rich food and driving down the winding West Welsh roads - instead of asking to pull over the car, he opened the window and got sick all over the side of the car.  Then his wife tried to clean it up with a little napkin.  Yikes!

Julie asked me to come jam with her sometime, piano and harp.  I was deeply honoured and I can't wait to collaberate with Julie.  As I've said, she's fantastic.

I have to admit, I'm slightly star struck when it comes to Ceri and Julie.  I thanked them one last time for their music.

Here's a link to one of their groups called Fernill.  "Whilia" is a great album that pays tribute to the valleys of South Wales.  Any of the Fernhill albums are worth checking out.  Try to find them on iTunes if you can.


We talked briefly about Dafydd Iwan.  Dafydd Iwan is a folk singer, made famous during the 60's.  He sang Welsh political songs and is a pretty strong nationalist.  He was briefly leader of the Plaid Cymru (Welsh national party) but lost his seat in 2008.  He also helped set up the record label "Sain" and toured with the band Ar Log.

As far as I know, he's some sort of distant cousin.

Having said that, can't say I'm a fan.  Whatever he might have once been, he's very definitely become "the Man" so to speak.

Here's how I see it.  Sain may have been a good label at some point.  However, a good portion of the records they have produced are truly horrible.  Typically very cheesy and horribly overproduced which tends to date pretty quickly.  They also produce quite a lot of that classical-ish sounding folk music which I find annoying at best.

I'm not being entirely fair because there have been a few musicians with Sain that are genuinely and extraordinarily good.  Plethyn for instance were extremely good.  As far as I know, they're not playing together anymore.  Another one of the greats is Sian James, singer and harpist.  She's fantastic!  She was with Sain but has left them to form her own little indie label.  I think Carreg Lafar is with Sain.  They're quite good as well, with some very interesting arrangements.

But there it is.  Not much else really.

So... Dafydd Iwan.  Here's what's put me off.  Some of his racist comments.  Let's see if I can explain.
It's like this.
I used to love Braveheart.  Really got the blood boiling.
Loved it, until I had this conversation with my cousin, Guy. As he put it, that type of extreme nationalism was no longer necessary in this day and age and was, in fact, dangerous.  Think Germany in the 1930s.  You can see where I'm going now.

So that's how it is with Welsh nationalism.  I'm all for people speaking Welsh, and learning about Welsh culture.  It's important, of course.  But that extreme, anger filled, racist nationalism is just wrong.

Now, Dafydd Iwan has been caught out in some interviews where he made some very racist comments, particularly against English people.

In one interview, he was asked about Fernhill and Julie Murphy.  He said this, "She doesn't represent Wales, she's just an English woman."
Right, here's the problem.
Julie's London raised, from an Irish family that had moved to Lancashire, married a Welsh boy, lived in the valleys, then Pencader, has lived in Wales over 25 years and speaks Welsh.
So...
What does that make her?

Here's another example.
Harriet Earis... London raised.  Always thought of herself as Welsh.  Plays the harp, speaks Welsh and Gaelic and has lived in Wales for over 10 years.
What does that make her?

Who is Dafydd Iwan to judge who is and isn't Welsh?  Screw him!

And... I have to admit, I am even related to people who have blown up English property, relatives who've served time for protesting...

But I'm also related to Pwyll and Enfys.  Two of my dad's friends who never left Llangranog.  Proper Welsh speakers.  Pwyll's dad was even arch-druid and one of the Cilie boys, hardcore Welsh bards.  Pwyll told me that his best friends are English.  To him, it doesn't matter.

For Pwyll and Enfys, it doesn't matter your nationality or what language you speak.  It's simply are you a half decent person or not.

It's a more relaxed attitude.  They wear their Welshness loosely and easily.
Happy to be Welsh but not immodestly.

My other issue with Dafydd Iwan is that his role in the music business has been mainly political b.s., which I can't stand.  And, worse still, his music isn't that good.