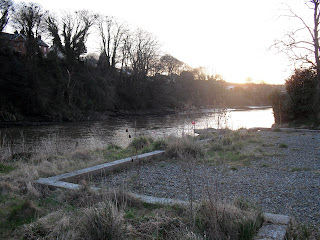 Today, I went with Sam to Aberteifi (Cardigan in English).  A friend of hers was doing a poetry reading in a cool little bar called The Cellar.  The pub has a great vibe and has live music on the weekends.

Aberteifi (Mouth of the River Teifi) has an old castle that is only now just being renovated.  An old woman lived there until recently so unfortunately the place is in disrepair.  Aberteifi is having a big 900th birthday celebration this summer so the whole town is being fixed up for the party.

It was also here, in Cardigan castle, that the Lord Rhys held an Eisteddfod... the first recorded Eisteddfod in 1176.  Musicians came from all over Britain.  The winner of the poetry was from West Wales and the winner of the instrumental music was from North Wales.  "Eistedd" means "to sit".  So Eisteddfod is sort of like a session.  It's a gathering for musicians and poets to exchange ideas but it's also a way for the professional standards to be kept high.  Musicians and bards were awarded degrees of learning in those days and a license to perform.  This part of it turned into a big competition.  Currently, throughout Wales, Eisteddfod are held all year long, but the big one happens once a year, alternating between north and south, and is called the National Eisteddfod.  It lasts a little over a week.  All the druids and bards come out for it, wearing their finest (yes, real druids!).  Most of the ceremonies around today's Eisteddfod were invented by a drug-addled bard and music collector named Iolo Morgannwg (real name Edward Williams, 1747 - 1826) and are based on pseudo-Celtic pagan rituals.  He was quite an amazing fellow - poet, musician, folk music collector, antiquarian, big influence on Unitarianism (as close to Atheism as you could get during that period) and a brilliant forger.

Back to Aberteifi... the riverside in particular has been cleaned up significantly.  There's a new foot bridge across the river now so you don't have to risk your life crossing the narrow bridge where the cars cross.  There's also a new poem along the side bank and a statue of an otter.  A little further on down the river front is my Aunty Liz's old house.  I remember going boating from this spot when I was about ten.  It was nice to be at the place again.  She had an old dog named Sam, that was deaf and blind in one eye.  What a kind dog.

Aberteifi is a strange little town.  The people here are very real.  The clothes are either toward the punk side or toward the practical.  Tough people but certainly more down to earth than further east.

Aberteifi is also home to the record label called Fflach.  Fflach is a very hip indie label.  Most of what I've heard produced by them is amazing - gritty, gutsy and honest.  They make both Welsh rock (RASP) and Welsh traditional records (TRADD).    You can try almost anything from them, it's most likely good.
Check out their website...
www.fflach.co.uk 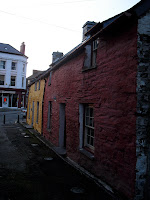 Here's another album you should all have. "Blas" a compilation folk CD from Fflach.  Blas literally means taste and it does give a nice variety of different folk music and musicians.

Fflach is suffering this year under the recession so if any of you out there are interested, give them your support!

Next, back up to Aberystwyth for some more jamming...
Hwyl.
Posted by gwdihw y nos at 15:20