Day 33 - and yet another digression - Diarmuid Johnson 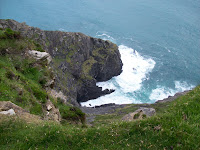 Diarmuid Johnson is one to remember...


I met Diarmuid in Aber about two years ago on the Welsh language course.  He was one of the teachers.  Diarmuid is Welsh on his mother's side and Irish on his dad's.  He speaks Welsh, Gaelic, Breton, possibly French and I think Polish.  He's written poetry in Welsh, Irish and Breton (has a full book published of Irish poems, Suil Saoir

) and is an amazing flute player.  His knowledge of Irish and Welsh music is legendary.  He's got an encyclopedic brain and last I heard, he'd learned over a 1000 tunes by ear.

I heard him play a couple full nights of Irish music, one with the Uilleann piper named Bruce and the other in a session in the Ship and Castle.  He also did a concert of Welsh music with Ceri Rhys Matthews.  He's got a big massive emotive tone and has a piercing intensity in his eyes and an aggressive full on approach to music.  He's ridiculously and unbelievably good!

One night, I was heading to the pub with my classmates and there was Diarmuid, just hanging out on the street corner.  I stopped to talk for a bit and tried my best to speak in Welsh, which made the moment even more poignant.

I told him how much I enjoyed his music and all that sort of thing.  We had a brief conversation.

Then I told him how hard I found it to understand native Welsh speakers because they talk differently, shorten words and speak in a very lilting melodic rhythm that isn't taught in the classroom.

Then, as we parted ways, he turned back to me and called out "Remember... Remember the song!"