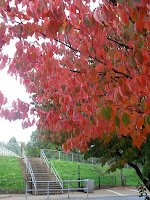 Is it just me, or are these blogs starting to get a bit... oh, I don't know... more boring than usual?  I think in my haste to catch up, I left out all the great little details.


Well, if you thought it'd get better, it's not likely.  At least not in this entry.  lol!


The fall Welsh class finally started.  Only three students for the first class.  Denise from the summer course was there.  Her and her husband Rob are from Birmingham originally and are both learning Welsh.  I've met quite a few people from England who are learning the language which is encouraging.

The other student was this girl named Alice.  She's an artist as well and speaks, at least to my ears, fluent Welsh.  The teacher kept correcting her on mutations and that sort of thing but basically fluent.  It was good to listen to her.  The class went from nine in the morning until two so it was a good chunk.

That evening, I saw Madison again, the Irish girl from Plwmp.  Her name really should be Buddug (Boudicca - you'll have to check "Week 13 - Day 87-89"  for the back story!) and I think I will call her that from now on.  I met her and her friend at Y Cwps.  Ifor also happened to be there (from Week 13 - Day 83-86).  When I met Buddug it was through the medium of Welsh.  Same with Ivor, so we all spoke Welsh through the night.

For some reason, Ifor asked me if I wanted to play basketball sometime.  Seriously?!  Have you seen how tall I am?  I said yes anyway, just for the exercise.

I had to leave the pub early to walk to the Welsh folk dancing.
I spoke a little bit more Welsh with Gwilym there.  My brain had switched gears into Welsh by then, so no turning back.  The group danced the Llangadfan dances.  I got to dance it was well, I think the hornpipe version.  I managed to follow the directions somehow and only stumbled a couple of times.


The next day I met Kelly's boyfriend Rhys to go see "Separado" made by Gruff Rhys from Super Furry Animals.  The movie was about him touring through Patagonia, Argentina searching for some long lost relatives who moved there in the 1800s.  It was a very psychedelic film, funny and interesting.  Some great music.  To be honest, Gruff reminded me of the No More Shape boys.  Very outside!

Rhys spoke Welsh to me the whole night.  He speaks Swansea valley Welsh which is different again.  I mostly understood what he was saying.  Some things I missed completely but did my best.  He's a really good guy as well.


Near the end of the week, Gwil and I went to Pencader to visit Julie and Ceri "Ffliwt".  A friend of theirs was there from Devon, Jim.  Jim plays the squeeze-box and also has a very nice voice.  I think Gwilym put like this, it's strong but delicate at the same time.  Of course, we had lots of great food and perhaps too much gin and wine.

Actually, now that I think about it, very definitely too much gin!

I think we were all out of our heads except Gwilym who, being much brighter than all of us, abstained.

We only stayed for one night but we played a ton of tunes.  Ceri "Ffliwt" told me my harp playing had really come along.  Of course, I was grateful for the compliment but I still feel very inconsistent on the harp.  I just happened to be in the zone that particular week.

Sadly, Ceri's dad had died a couple weeks previously but he seemed to be doing alright.  He talked quite a bit about the Swansea Welsh he'd heard at the funeral or "ffyndrel" in that dialect.

Swansea Welsh apparently is much more similar to Cornish and Breton than the other dialects.  Loads of different words.  For example, in Welsh, if you want to talk in the past, the verb ending (3rd person) becomes "-odd" but in Swansea Welsh it becomes "-ws"... I think that's how it was... also, they use words like "whilia".  In standard Welsh the verb 'to speak' is "siarad" but in parts of South Wales they say "whilia" which comes from the word "chwedl" meaning 'a tale'.

All the dialects are so interesting but at the same time, it makes learning the language that much more difficult.

I had another Sesiwn Cegin Ceri (Ceri's kitchen session) with Gwilym and Elsa.  Okay, one of these blogs I'll dedicate to these sessions and their joyfulness... when I have a bit more time.


I ended the week with a failed jazz gig in Caerdydd.  By failed, I mean it plain just didn't happen.  There were a couple of reasons for this.  None of them worth talking about.  That night I stayed with Paul and the boys.  Mel had gone to Chicago for work.

On the way to Caerdydd, I met Aunty Susan and a boy named Rhodri.  Rhodri's from Cardigan originally and plays guitar in some indie rock band in Bristol.  We spoke Welsh for the entire four hour bus and train ride. I mostly could understand.  Sometimes Rhodri was difficult because he spoke quite fast and, like a lot of the younger Welsh, used different phrases which are hard to pick out.  Of course, my ears were very tired by the end but still pretty good.

This was the week I was finally started to think in Welsh again.  Took long enough...

On Saturday, I made my way Pontypridd... well, really it was Pentre'r Eglwys but I went through Pontypridd on the way there.  The tune I sang on the Blodeugerdd CD is about a girl from Pontypridd.  Unfortunately, I didn't have time to spend there to catch the vibe because I had to meet Ruth.

Ruth works for Morley harps.  She was at a Clera workshop and she'd brought a couple of harps for me to try.  The one harp, the 'Avalon' was abysmal, from Indonesia or something.  It may as well have been made with particle board duct-taped to a cardboard box.

I also tried a dusty strings harp, the 'Ravenna'.  It wasn't too bad but the sound was just slightly too brittle and bright for my taste.  It also had nylon strings which I'm not fond of.  It's possible that over time the harp could be worked in, to sound better.  Though at the cost of £2000, not worth the bet.

I had a nice chat with Ruth about harp music and harps.  She was really sweet.  She's from Abergavenny originally but works for the harp store somewhere near Oxford.  Her Welsh is also very good but for some reason she switched into English.  I was tired anyway and was happy enough to stay in English.

Next, another wild night in Pencader and a visit to Dolgellau...
Hwyl.
Posted by gwdihw y nos at 16:52