Martin and Sille had to leave on the Tuesday.  They were playing a twmpath somewhere with Julie and Ceri "Ffliwt".  Man, I wish I could have gone to it.

Of course, Erin left for Harvard and I'll miss her.  But I did manage to hang out with Kelly and her boyfriend Rhys.  Kelly had to leave for Cambridge shortly after that.


I started to meet with Gwilym and Elsa again more frequently.  We played together at a wedding in Cei Bach just outside of Cei Newydd.  There was five of us, Nigel (Gwil's dad), Keith, Elsa, Gwilym and myself.  I didn't know lots of the tunes and had to try to find some chords on the fly.  Holy crap, that was hard.  Sometimes, I did alright and sometimes I couldn't figure out where the tunes were going.

Elsa had written a beautiful tune for the wedding.  It had two parts.  The fiddles started together and then one repeated the A section while the second played the B part.  It's an amazingly complex piece and perfect.  There are parts in it where the fiddle players can choose to play either a C or a C#.  It's meant to symbolize the way a marriage sometimes works.  So clever!  The way she wrote the music to swirl and ebb is gorgeous.  I'm not sure if she had some chords in mind but I ended up playing a D drone.

The spot of the wedding was very picturesque.  Pretty amazing actually.  While at the wedding, Gwilym, Keith and Nigel asked if I would play another wedding with them that evening near Devil's Bridge.  It was a Welsh / Jewish wedding.  I had planned to see Sam, Geraint and Aunty Susan but I couldn't turn down such an invite.

In between the first wedding and the second, we went over to Keith's farm near Aberaeron.  I think Keith is from England but he's as Welsh as anyone I know.  We jammed some more tunes, proper Welsh style.  There we were, on a Welsh farm somewhere in the hills of West Wales, cranking out Welsh tunes with two fiddles, flute and harp.  Great!

I also got to see this old triple harp made in 1872.  It was a prize given by Lady Llanover at one of her Eisteddfod.  The front pillar was very ornate with oak leaves and such.  What a beautiful harp.  Thankfully, it hasn't been given to the National Library.  Apparently the Library had one of Edward Jones' harps and they let it turn to dust.

Anyway, we ended up playing at the wedding until around one in the morning.  I think the twmpath there went very well.  The wedding itself was trilingual in Welsh, Hebrew and English.  It was a nice mix of cultures.


I met with Harriet a couple of times and traded more tunes.  She'd recorded a Manx fiddle player playing a Welsh tune but neither of us has been able to find a name for it yet.  I can't remember exact details but I do remember she made me some real nice soup. 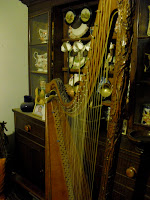 Another thing I've been doing regularly is going to these twmpaths.  Well, they're not quite twmpaths, they're more like dawnsio gwerin Cymreig.  Every Monday evening, I walk over to Llanbadarn and join Gwil, Elsa, Keith and a bunch of others to learn some proper Welsh folk dance led by Nigel.  The foot steps and patterns are somewhat fancier.  I have trouble remembering all the steps but still really enjoy it.  As they say, dancing's good for the soul!

With this group, I've also had the chance to see the Llangadfan dances.   The Llangadfan dances are a real treasure.  They were recorded in the late 1700s in a letter from William Jones (1726 - 1795) to Edward Jones.  Llangadfan is a village in mid-east Wales, very close to Llanerfyl where Siân James and Parti Cut Lloi live.

The dances are performed in a similar fashion to the old way of "penillion" singing.  This will be hard to describe but originally the musicians would have chosen from one of at least seven tunes.  The tune was to be played nine times.  The 3 pairs (6 dancers) would then work out how to fit the Llangadfan patterns into the style and manner of the chosen tune.

It's an amazing set to watch and participate in.  The dance is complicated and rustic all at once and I think, peculiarly Welsh.  They also have the weight and feel of their 300 year old age.

It may have been that each village or county had their own patterns and tunes all of which are now lost.  Even in William Jones' time, he believed the dances wouldn't last another generation.

Thankfully, he had the foresight to record them.

Next, I join Sild in Caerdydd...
Hwyl.