My parents and I did a lot of traveling during the next week or so.

We made a trip to Ystrad Fflur, the old ruined abbey.  It's just outside of Pontrhydfendigaid, Ceredigion which is not too far from Aberystwyth.  Founded by some Cisterian monks back in 1164, it later came under the patronage of the Lord Rhys.  There's not much left of the abbey these days but there are still some great things left there to see.

The archway gives us a glimpse as to how beautiful the building must have been.  You can still see some of the glazed tiles, the chapel altars and the baptismal well.  There are graves here from the 1200s, presumably where the royalty of Deuheubarth lie.  The land around here is beautiful, very still and quiet.

A most moving part of the area is found just outside the abbey where stands the old yew tree under which Dafydd ap Gwilym is buried.  The tree itself is over 800 years old.  Dafydd ap Gwilym (ca. 1320-1370) may be the finest poet Wales has ever produced.  What's so great about him was that he didn't belong to the professional class of poets.  Because of that, he was able to write with greater freedom, both in metre and in subject matter.  He must have been very affected by the French trouveres and troubadours because his writing has a similar feel.  Very personal and human, and obsessed with nature and worldly love.  Sometimes reverent, sometimes funny and other times bawdy.  One of his most risque poems is called 'Y Gal', a cywydd (couplet) written about his genitalia.  I recently saw another poem by a woman, Gwerful Mechain (1460-1502 ca.), possibly written in response to Dafydd's poem, praising her genitalia.  I love it!  For those that say Wales is full of puritans, I say thppppt!

I came across another interesting Welsh poetess, Katherine "Orinda" Philips (1632-1664).  Although she was born in London, she lived most her short life in Aberteifi (Cardigan).  I think she wrote only in English.  England claims her for themselves and I think she's been ignored in Wales because she wrote in English.   Hmmm...

Anyway, the list of Welsh poets is huge, too big to list here.  Maybe I'll try to throw out some names occasionally in later posts.

I took my parents to Cors Caron.  Cors Caron is a massive peat bog not far from Tregaron.  The park has built a long boardwalk that winds across the bog.  Two years ago, this is where I saw my dragon.  Yes, I did!  I saw a dragon!

I really like saying that to people, to see their reactions - sometimes of surprise, sometimes of incredulity.  I mentioned it to Ceri and Julie.  They did seemed surprised at first but they asked me to describe it.  It was a rust red coloured newt with a long curling tail that scurried in front of me across the boardwalk.  It stopped for a fraction of a second and then scurried back into the bog in a big swirling arc.  When I described the critter, Ceri "Ffliwt" said, "You did see a dragon.  You really did!"  And that, is the truth.

I've seen a Welsh dragon...
On this particular trip to the bog, there were no dragons, but we did see a heron bird fishing.  The area is so quiet.  It's still possible to see the places where people in the past dug out the peat for their fires.  This might be one of my favourite spots in Wales.

Next, we visited the wool mill museum and saw some Welsh costumes.  My mom is making Welsh costumes for the Calgary Welsh society.  A very nice woman let us take pictures of one made from her great-grandmother's design.

We also visited Jeff and Liz Probert in Llandysul, old friends of my dad.  Real characters... check out Jeffrey's Welsh origami made from old cigarette packs.  It's a container for candies or, more likely, tobacco.  That may be the coolest thing ever made!

For some reason, they've become friends with john 'the bastard'.  Don't know why.  I don't feel like telling this story now, but I'll just say, if I ever see him... sarhad, man, dial...

On the weekend, we went to the Cardigan food festival which was pretty good.  I saw this young Romani (gypsy) kid playing jazz guitar.  He was incredible!  Sounded like a mix of Django and Pat Metheny.  It was really over the top.  I bought some elderberry port before we visited Cardigan (Aberteifi) castle which still needs £10 million worth of restorations or something like that.

This is the castle where the Lord Rhys held the first recorded Eisteddfod in 1176.

We saw Aunty Liz's old shop on the pier and my dad was feeling hiraeth that day.  Later in the evening, we went to Y Llew Du.  A small group of people started singing.  They must have just come from choir practice and by the time we left, a whole crew was there singing.  It was fantastic!  That's the way choir singing should be.  Wild, loud and alcohol fueled!  I recorded some of it and if I can figure out how to put it online, I will. 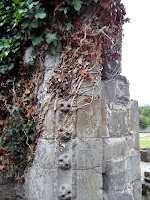 We also stopped by St. Dogmaels, just across the Teifi river from Cardigan.  Officially called Llandudoch or, if I'm remembering right, Llandoch by the locals.  It's home to a ruined abbey.  I once saw some Shakespeare here which was the perfect atmosphere.

These ruins are a bit more interesting than Ystrad Fflur but the location isn't as secluded.  There are still some great carvings on some of the walls, the oven in the back room is still intact and the best of all, the crypt is open.  Well, what's left of the crypt.  Very cool.

A black cat decided to be our friend and followed us around the abbey.  Cute... or maybe possessed.  You never know with cats.

Next, I join Cwrs Haf in Aberystwyth...
Hwyl.