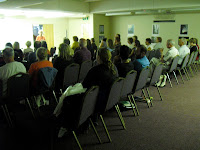 I spent hours every day working on Cwrs Madog.  And finally the Cwrs arrived!  It was all very exciting.  It was good to see everyone again.  I really enjoy these weeks and as much work as it was, I was glad to be part of it.

Most of the week went well but a few things didn't go quite as planned and the college was really difficult to work with, except for one of the kitchen staff, a fellow named Antony.  I think I've said this previously, but the service industry here is not great.

Anyway, it really was good to see everyone there.  Hefina worked absolute miracles and landed some great guest speakers.  We also (thanks to Maggie, Nance and Mike) got to meet the mayor of Cardiff which was very cool.  I met my dad's friend Gren, who owns the diamond mine.  I think Gren is from Merthyr originally and back in the late 60's, him and my dad were prospecting together in the NorthWest Territories.  Sin, Maegan, Trisha and Rob were there.  Chris Reynolds brought his crew from Abertawe for a nice little session.  The Swansea bunch play differently from the Dolgellau group - much more Swansea like, if you know what I mean.

Maggie and Vivien were there from the Edmonton bunch, of course.  Alan, Mona, the Morgans... Okay, there's too many people to list really.  But I have to give a big shout out to the Cymdeithas Madog Board who put in huge amounts of work to make the cwrs so much fun.

One thing that was particularly moving was when Rob won the Madog Eisteddfod.  He was so shocked and so thrilled.  Nice moment! 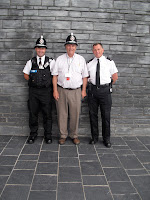 If you don't know what Cwrs Madog is, it's this North American Welsh Society dedicated to all things Welsh but mainly to learning the Welsh language.  What I like about it most is how people come from all over the States and Canada, all ages and all types, and learn Welsh together.  I think most Welshies would be surprised by the enthusiasm and dedication these North Americans have to the Welsh language.

I spoke a fair amount of Welsh with my dad, but still had loads of trouble understanding.  One afternoon, my dad wrote an "englyn" on a napkin, dedicated to Rebecca.  Rebecca, a regular at the cwrs, is a blind woman from Toronto who recently married a Breton and moved to Barcoed, Wales.  She's an incredible person and has a cute dog named Amber.  Anyway, I really love the poem my dad wrote.  Check it out.


The last two days of the cwrs were spent at the National Eisteddfod.  The Eisteddfod is this big art competition.  I have mixed feelings about the Eisteddfod.  On the one hand, it's great to see that so much emphasis is placed on the arts in Wales.  But, unfortunately, most of the music here drives me up a wall.  I think in part, it's because competition in art just don't seem to make for good art. 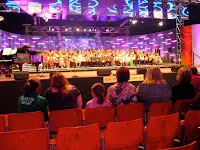 I like my art to have a touch of failure.  Or at least to have gone through a period of failure.  If the artist is always worried about maintaining someone else's standard, about looking good for the judges, the art starts to become plastic and dishonest.

Having said that, there are parts of the Eisteddfod that are really enjoyable.  I'm not sure what it's called but I always call it "Ymryson y Beirdd" - Battle of the Bards.  There's usually a referee who will give a topic or a line to start with.  Then the bards go at it, creating poetry on the fly.  It's incredibly clever and very impressive.  It's very much like rap, except a little more formal.

I also really enjoy the choirs.  But for some reason, it's become the norm for the choirs to perform very  cheesy modern tunes.  At least, cheesy for my taste.  I actually prefer the old hymns.  They're just better written.


My doubts about the Eisteddfod aren't new or original.

For example, Lady Llanover (Augusta Hall (1802-1896)) became disenchanted with the Eisteddfod back in her day.  Her bardic name was Gwenwynen Gwent - the bee of Gwent.  She was an incredibly strong woman who supported Welsh artists of all sorts - poets, harp makers, singers, harpers.  She wrote an essay on the importance of the Welsh language and was responsible for upholding the Welsh triple harp tradition.  As early as 1868 she was holding her own Eisteddfod.  She was upset by the anglicization of the National Eisteddfod so she simply created her own arts festival.  And the best part is she disqualified any harpers who played the pedal harp.  Fantastic!


Another opponent of the Eisteddfod was Ivor Ceri.  Ivor Ceri (John Jenkins, 1770-1829) was a minister in the church of Wales and a reputable collector of folk songs.  I've had the pleasure of searching through his collections which were written back in 1820.  It's quite a thing to hold a 200 year old handwritten book!  Incredible doesn't even begin to describe it...

Ivor Ceri originally helped the National Eisteddfod quite a bit.  But by 1828 he had given up because he believed the Eisteddfod were turning into "an Anglo-Italian farce."


Funny how it hasn't really changed.  Of course the current Eisteddfod is all in Welsh so that part is cool but the music is mostly still this horrible Italian/ English classical mix.  Everyone tries to sound like Haydn.  Like Haydn!?


Now you might have the impression that I don't like classical music but I do.  I love Beethoven, Mahler, Mozart, Bach, Gabrieli, Chopin, Josquin de Prez, Steve Reich, Philip Glass... But for some reason, the transliteration of Welsh folk music into an Italian opera or a Haydn oratorio just rubs me the wrong way.  Musically, it does absolutely nothing for me.  I think the intent behind the music is completely off kilter or something.  I can't think of any other way to explain it.

And it's tough to argue about it.  Take someone like Katherine Jenkins, the current Welsh 'superstar'.  She's sings at just about every major Welsh event.  And here's the thing.  She's a good 'singer', in a sense.  By that I mean, she sings in tune, she's got that clear operatic voice, huge vibrato and lots of power.  So by all accounts a good singer and yet, I really can't stand her singing!  It drives me nuts.  What is she trying to express?  It's meaningless.  I just don't get it... It sounds like 'blah, blah, blah, blah'.

Give me Tom Waits any day.  Leonard Cohen, Joanna Newsom, Captain Beefheart, Joni Mitchell, Ani DiFranco, Ray Anderson.  Sure, they don't sing with pure voices or perfect vibratos or perfectly in tune or are in tune even a little bit... but holy crap, can these people SING!  I mean, really sing.  Like the way Bob Stroup used to sing trombone.  Or Miles.  Or better still, Coltrane.  What a voice!  These musicians actually have some truth, some point of interest, some emotion to express.


Is the Eisteddfod fixable?  I don't know.  Not as long as the ruling Welsh class rules...


Yeah, this was the month where I began to notice this other crazy side of Wales.  This strange class system.  In the old days, it was more pronounced, at least as I understand it.  It all had to do with whom you were related.

That strange sort of tribal hierarchy used to be very prevalent.  It's not as bad now and many people are opposed to it or ignore it but...

...I've found the elites here in Wales and I don't like them.  The Tafia, I suppose.  I had always known, or at least joked, that they existed but actually got a closer look and I nearly lost heart.

I could go on at length about that but maybe I'll save that for another time as I've already rambled on far too much.

Next, visiting with my parents...
Hwyl.

"‘Gwenynen Gwent’ had the heartiest sympathy, as he had himself, for everything that was truly Welsh, and for everybody save ‘Dic Shon Dafydd’.  The Eisteddfod had her ladyship’s most cordial support when it was the true Welsh eisteddfod, but not when it was of the mongrel sort that had recently taken place at Cardiff. But she could not look with toleration upon such a fellow as ‘Dic Shon Dafydd’, who was half ashamed of his mother, his language, his harp, and the religion of his country."
*Dic Shon Dafydd is sort of the Welsh equivalent of an Uncle Tom.
Posted by gwdihw y nos at 17:57