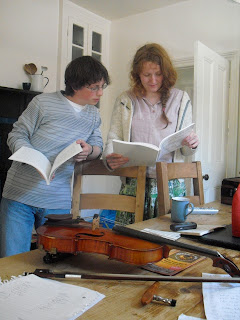 So I had a chance to meet up with Gwilym and Elsa once again.

On the day, Elsa showed up at my door slightly late and slightly out of breath.  I asked her, jokingly, if she'd been running and to my surprise she said yes.

It turned out she had lost her car keys.  I asked her where all her instruments were and to my now shock, she said she'd left them by the car.

She quickly reassured me that some woman was guarding the car so not to worry.  I left a note for Gwilym and walked with her to the Prom where her car was parked.  There was a very nice woman there who had very kindly looked after Elsa's instruments and bags which were strewn over the sidewalk.

I asked Elsa to think back to where she'd last seen her keys and she couldn't remember.  She said, "I must have had them at some point because I managed to drive here."

That gave me a laugh.  Then she says, "I don't know, I might have accidently just flung them into the ocean as I got out of the car."

I really couldn't stop laughing.   We absolutely tore apart her car and searched through all her bags.  After quite awhile, still no luck, so I told her I'd go get Gwil to help us search.  I found Gwil waiting by the house and filled him in on what had happened.  He laughed a bit and then we joined Elsa once again in the search.

After another twenty odd minutes, I took one last look down the sewer drain.  We'd looked down there before but this time I tried a different angle, and sure enough, there the keys were resting.  Gwilym, using a little ingenuity, used a tape measure (that Elsa had in her car for some reason) to snag the keys and then we had a little party!  Well, we had some tunes and food, but close enough.

That's Elsa, absolutely touched by the Tylwyth Teg and I wouldn't have it any other way.  It's what makes Elsa the beautiful person that she is.


Later in the week, I joined Ceri "Ffliwt" and Gwilym on Ceri's last teaching day at the Welsh language school in Dolgellau.  He's passing it on to Gwilym and I to keep up the program in the fall.  We played a little concert for the kids.  It was incredibly unnerving, more so because I didn't properly know the tunes.

One of these days I'll catch up... 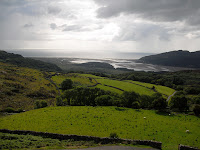 Anyway, before the session that night at Gwesty Gwennan, Ceri "Ffliwt", Gwilym and I took a long walk through the mountains, close to where we'd been before with Julie.  It was really nice to listen to the two of them chat about music, both very insightful.  Ceri "Ffliwt" mentioned that humans were one of the only critters to point at things.  For a long time, I've thought that's exactly what music is.  A way to say, "Hey, look at that rose" or  "Hey, check out this sorrow."  Nice.  We sat and watched as the rain clouds came over the mountains and then we all suddenly realized how quickly it was coming at us.  We started barreling down the mountain we were on but got absolutely soaked.  The rain was flying at us sideways.  Luckily it didn't last long and then we ate sandwiches that Julie had made. 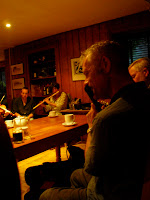 The session was another good one.  If I'm remembering right, there were quite a few people.  We sat in a great big circle.  Gwilym, Elsa, Keith and Bronwen were there.  Bronwen's from Toronto and she played a really nice Quebecois tune.  Maria, Ben, Jem, Gary and Phil were all there.  Also, quite a few people who I haven't met properly.  Ceri "Ffliwt" sang some great tunes.  Really moving...

I ended catching a ride with Keith along with Elsa, Gwilym and Bronwen - all of us stuffed in the car with the harp on our laps.  That was something!

Other than that, most of the time was dedicated to Cwrs Madog.  Part of the difficulty was being both on the board and the local committee.  Double the work!  But more about that later.