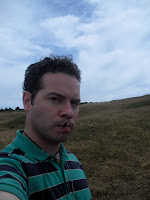 Again, I'm having trouble remembering everything... I did see Harriet play a show at the bandstand.  Almost a marathon, nearly a full two hours solid.

I was doing a tremendous enormous amount of work for Cymdeithas Madog.  Actually, it took up most of my time for the next few weeks.  So much time, that once the course was done, I was done.  Absolutely fried!

I have been meeting regularly with Gwilym and Elsa.  I think nearly every week.  I love playing with them.  I'd like to find the three of us some gigs and I have some ideas.  Fingers crossed... 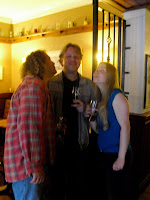 I met with Sille and Martin again.  This time we went down to the Gower to Martin's parent's house.  We met up with Dave "Doug" Morgan.

He was a teacher on one of the Cymdeithas Madog courses a few years ago.  He's a real character and a good boy.  I spoke a bit of Welsh to him.  We all got very very drunk.  hmmm, there seems to be a running theme here... 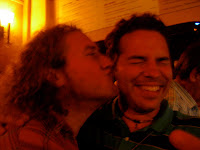 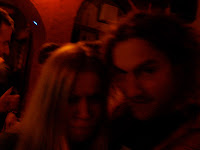 Anyway, that Saturday evening I was alright as I ate lots when we eventually got home and drank a ton of water.  Sille, on the other hand, was in rough shape the next day, poor thing.  Martin and I jammed during the afternoon.  We made a real connection with some folk improv.  How cool is that?!  He's got a great sense of melody and rhythm. 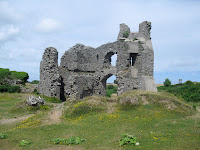 Apparently, some Norman lord held a party there and didn't invite the faeries.  So the faeries held their own party just down the way, near the beach.  They were having a great old party, with music and dancing and fancy faery lights.  Well, the king didn't like that at all and sent his soldiers to chase them away.  But before the soldiers could get near them, all the faery lights went out and the faeries vanished.  That night, the faeries caused a great storm to blow and by next morning Pennard castle was buried under a mound of sand.

The epilogue to the story... a huge chunk of beach was found to be missing from Ireland the next morning!

What a fantastic story.  So here's to more Tylwyth Teg (faery) parties!  I'll be there, mead in hand, playing the harp and dancing with some Irish girl... lol!


Martin figures Gower must have been a sacred site at some point because of all the great old neolithic remains in the area.  Up one of the hills, called Cefn Bryn, rests Arthur's stone (Maen Ceti - a large standing stone) possibly dating from around 3000 BCE.  I think the legend goes he threw a large stone all the way from Llanelli - maybe even a stone that was in his shoe. We didn't have a chance to see that but we did visit this old burial chamber. 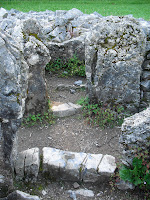 The burial chamber is called Parc Cwm Cairn.  It dates from about 6000 BCE.  There's not much left of it but it's still very cool.  There's the remains of an entrance way and a short hall with four chambers just off either side.  It's so amazing to be able to feel these old stones and connect with the past so vividly.

Then to top it off, we went to some old cave dwellings just up the valley.  Very secluded and cozy little shelters.  Seems they were used from 6000 BCE onward, all the way up until the Beaker folk.  The Beakers were given that name for the type of pottery they made.  Possibly arriving in Britain around 2500 BCE and having influence until 1700 BCE.  What kind of people they were, where they were from (whether there was any actual migration or not) and all that is still under some speculation I think.  Supposedly, if their grave sites are anything to go by, they lived side by side with the previous population (the Beaker folk skeletons are bigger... maybe).  Some scholars have suggested that they were proto-Celtic.  For some, this would explain the gap between the q-Celtic and p-Celtic languages.

Again, I really couldn't say whether that was true or not.  It's just some stuff I've come across. 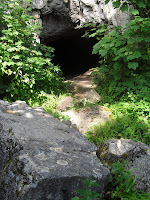 Gower is also home to the Paviland cave.  It was here that the "Red Lady of Paviland" was discovered.  Turns out the skeleton was a he, and he was covered in red ochre.  The real cool thing is the skeleton dates back to 29,000 BCE.

Such a number is almost impossible for me to imagine.  A burial that happened 31,000 years ago?  So amazing.  I've seen a replica of the bones in the Welsh National Museum and it is humbling.

Martin's parents were really gracious and lovely people.  They let us crash at their house and eat all their food.  Great house as well.  This area is Martin's bro, his homeland.  You can tell by the way he talks about it.