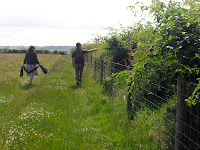 I was in Pencader again.  I don't really remember what happened there.  I know we went for a big walk around the fields.  Found out there's a farm called Plwmp.  "What, there's another Plwmp?"  I remember taking the bus back to Aber, just relaxed a bit.

There was another session in Dolgellau that week.


I went for another walk with Julie and Ceri before the session.  Somewhere past Cader Idris.  This is the place with the little island in the middle of the lake, the one that I painted as a purple mountain.  I'll post that pic later... We climbed further until we could see the ocean.  It honestly looked and felt like I was in middle earth.


There was a good mix at the session.  Gwilym and Elsa were there and another harp player named Lowri.  She studied with Nansi Richards I think and is also friends with Siân James.  She played stride left hand, in the Welsh style.  That's something I'm not sure I'll ever be able to do, very difficult to pull off.

Lowri, Ceri Ffliwt and Julie spoke a lot of Welsh with me, so that was good.  Sometimes, I understand lots of things in Welsh and sometimes I can't understand a thing.  Very frustrating.

At some point, people started playing all these American tunes.  So I had to represent and sang NorthWest Passage by Stan Rogers.  Julie, Phil and Ceri Ffliwt all sang tunes, each in their own unique style.  Very sweet!  I got the chance to play 'Cysgu di' with Julie which was "lush" as Gwil would say.

That weekend, I was off to Cardiff to see Sarah Campbell's medieval Welsh play.  Sarah's a good friend from the States who I met at Cwrs Madog.  At any rate, it's not really her play.  She was researching it as part of her Fulbright scholarship.  It was written sometime in the 1500's and called Y Gwr Cadarn (The Strong Man). 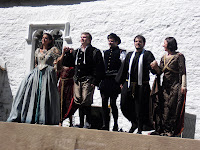 It was kind of a morality play, but she explained that it had elements of an early Welsh comedy.  It was in medieval Welsh so I didn't understand much of it but it was still cool to see.  My cousin John came with me.  He said the Welsh was even a bit tough for him to understand as well.  He's still writing his book which is really exciting.

The play was performed outside of St. Teilo's church on the Sain Ffagan grounds.

St. Teilo's church was originally located in Llandeilo Tal-y-pont before it was saved by the Sain Ffagan museum.  The church was constructed sometime during the 1200s overtop the original Celtic sight.  The place was in complete disrepair by this century.  When they were moving the church they found all sorts of medieval paintings under the layers of white lime.

St. Teilo himself was supposed to have been born around 500AD.  He was friends with St. Dewi, Aeddan and Ysfael.  Teilo is supposed to be the son of Ensich ap Hydwn (the grandson of Prince Ceredig, the supposed prince that Ceredigion got it's name from).  He helped Dewi set up St. David's in Pembrokeshire.  His animal is a stag because when marking out land for a church a magical stag picked him and and gave him a lift.  What a weird story... He ended up in Brittany at some point in his life where he planted orchards with Samson.
Anyway, I stayed with Paul and Mel for the weekend.  Paul got me free tickets to see Paul McCartney who was playing in the Millenium Stadium.  Sir Paul even spoke some Welsh and flew the Welsh flag!  That was cool.  If anyone in Wales had half a clue, they would have made a huge deal out of it.  I mean, Sir Paul spoke Welsh for crying out loud!  Anyway, he played a lot of Beatles tunes, some Wings and some of his new stuff.  I didn't recognize lots of tunes but it was good to see the legend in action.  His voice is still quite good even after all those years and the band was really tight.
Paul and I went for curry after, as we'd both had too much beer.  Definitely a good night.