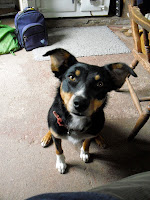 This little dog was hanging out in Y Gelli with us and belongs to Tamara.  Cute little dude...


I hung out in Pencader after the twmpath.  I didn't have my harp so couldn't jam with the others.  My fingers were itchy.  I think I played a little piano.

On the Monday, I caught a ride back to Aber with Julie and Ceri.  Julie was catching the train to visit her mom.

I practiced my tunes as much as I could.  I had to get ready for the gig in Y Gelli (Hay-on-Wye).

I went to Ystalyfera again to rehearse with Sille and Martin.  I think that was the Wednesday.  The tunes were sounding real nice.  It's a real pleasure to work with the two of them. 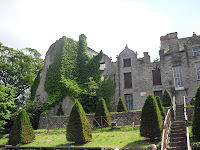 I think we went to Hay-on-Wye on the Friday.  We were playing at this club called The Globe.  Martin had forgotten some of the equipment so we had to use some of the club's mics instead.  I was impressed by how calm both of them were as I was pretty nervous.  I played an opening set before Sild.  I probably should have played a couple more Welsh folk songs but I went with tunes I was more familiar with.  I also couldn't think of anything to say to the audience so that was a good lesson. 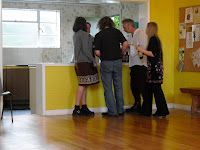 I played the tune I wrote for Martin and Sille, which was cool to do.  It was only about 2 weeks old at that point.  Anyway, Sild played after me and they were incredible.  They play so beautifully and masterfully together.  And they both have an easy and natural way with the audience between tunes.  Extremely impressive!  If you haven't bought their CDs yet, you should.

I joined them for the last part of the night.  I got to play my trombone (muted) along with Sille on the huii-kannel and Martin on guitar.  Someone in the crowd said it was "heavenly".  Martin and Sille are real pros and I was happy to go along for the ride. 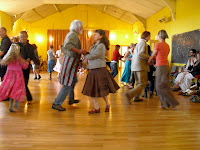 The place was fairly full and the crowd was great.  They were very attentive to the music which I really wasn't used to.  Nigel from the Twmpath was there with his boyfriend.  There was also another Nigel from Maesyfed who promised some gigs later in the year.  Tamara was there, the woman who was letting us stay at her house.  She has this great little farm up the side of some mountain.  It was so serene. She's a very interesting character, very kind and warm hearted.


The next day, we drove around the area to pick up some cider.  The area is full of orchards and cider brew houses. 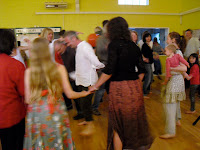 Then we made our way to Abercych.  (Yes, Abercych from the Mabinogion, you all know it!)  Martin, Sille, Ceri and Julie were playing for this twmpath there hosted by Simon.  It was unbelievably freakin' cool!

The event started with a normal Welsh twmpath, and then in the middle of it, there was a performance by some improv'd modern dancers with Ceri Ffliwt improvising.  The woman, I think, was from New York and the man was from Japan.  The dance was really well performed and very down to earth.  I thoroughly enjoyed it.  Then, back to the Welsh twmpath. 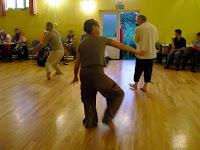 Because of this, the crowd was a great mix of real Welshies, English hippies and modern dance / avante guarde types.  It was so much fun.

I remember at one point, we were doing some type of set dancing.  My partner was this Irish girl, (who could do the actual skip step) and there was a family in our group (I think it was Daniel (Tomos' brother) and his family - friends with my cousin's husband, Damian)  At any rate, we couldn't get the dance right but the one time we did, we all gave out a great cheer.  lol!  That was way too much fun.  The Irish girl was super nice.  I guess she's going out with some ex-TV star and the lives with a little cultish group of hippies or something.  Drueni! 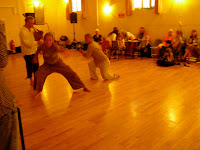 At another point, I was dancing with an old Welsh farm woman, and she was basically throwing me around the dance floor.  So crazy strong!

I really enjoy these twmpaths.  Very informal and slightly wild, just as I imagine it was in the old days.  Anyway, I set out to drink too much wine that night and managed to do just that.  We went back to Julie and Ceri's that evening and had a great little party after.


Next, back up to Dolgellau for another session...
Hwyl.