My parents were here in Wales for their holidays.  I hadn't seen them since March so it was good to have them here.

The first day after the cwrs, we were in Cardiff and had a big family supper with Guy (Pibs), his girlfriend Zara, John, Paul, Melody, Cos, Bob and my folks.  It was great to have such a big portion of the family together.

Paul made a couple of cracks about Welshies as he sometimes does (even though he's from Aberdâr himself but probably because Mel warned him not to) but we all took it pretty lightly.

Melody made this fantastic meal and we had some nice wine.  It was really lovely!


The next day we searched out my great-Aunty Alma's grave in Cathays cemetery.  I had never been able to find it before so that was a good to finally pay a visit.

My Aunt used to live in Strathnairn Street, Cardiff.  She was a character as well.  I'll never forget the out-door loo or the supposedly newly installed warm shower that was perpetually freezing.


Later that day, I went to St. Ffagans with my parents.  All the old buildings are really interesting.  They used to hire people to dress up in period clothes that would answer questions but they've done away with that for some reason. 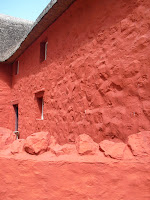 Check out this red building - Y Ty Coch.  It originally was painted with ox blood to keep away evil spirits.

The inner museum of St. Ffagans has changed quite a bit and is much more geared to kids.  Unfortunately, they've pared it down quite a bit and some of the more interesting displays have vanished.  It's nowhere near as good.

There used to be these great bits of paper with old Welsh spells on them and a book titled "Book of Magic" that was basically an astronomy book with odd looking graphs of the planets and stars.  And there used to be a plethora of old and varied instruments.  But now they've limited it to the standard three - harp, crwth (type of bowed lyre) and pibgorn (pipe).

Fortunately, they still had displayed some of the old rowan (wrapped in strips of cloth) wish sticks, the wren's house, the puzzle jugs, carved love spoons and the Mari Lwyd horse's head.  Maybe I'll write later about all those traditions, given the time. 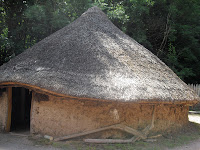 There's also some reconstructions of the old Celtic huts.  They're interesting.  Very Asterix and Obelix!

Then we went to Cei Newydd for a quick visit with Sam, Geraint and Aunty Susan.  I can't remember exactly what we did.

I got a last minute concert at the bandstand so I practiced like crazy.  The call was from one of Harriet's friends, Ian Rowlands.  It was real cool of her to pass my name along.

Sometime during the week, we had lunch with Sam, Fran, Brychan and Cristyn in Aberystwyth.

Cristyn took lots of pictures and Brychan played on the swings.  It's so good to hear them speak Welsh!

Another great meal with a different portion of the family!


Here's a couple more pictures of the family.
Next, onto Mwnt, Ystrad Fflur and a whole bunch of other places...
Hwyl.
Posted by gwdihw y nos at 01:53