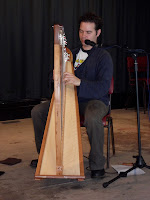 The harp concert was pretty good.  I had to play for nearly two hours, just myself and my harp.  People wandered in and out of the bandstand on the prom and was a relatively relaxed event.  Of course, I was still very nervous but I think it went pretty good, only a couple of missteps.  Or maybe a few...

On one of the days, my parents and I walked up constitution hill in Aberystwyth.  It's actually not too bad a walk.  Maybe only about 20 minutes or so, though very steep.  There's an old Victorian tram car that rides up and down the mountain in case you don't feel like walking.

At some point, I took a walk behind the cliffs.  Past a small shed nearly in ruins, there's a small gorse grove, and just past that, in the corner of the field, is a little stone circle, only recently built, dedicated to the lady of craiglais.  I assume it's a marking for someone's pet.  The area is quiet and peaceful, and a nice place to practice some qigong. 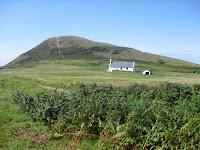 Later in the week, we went to Mwnt which is close to Aberteifi.  Mwnt is one of my favourite spots.  There's an old quaint church here which was built sometime in the 1200s.  Inside the church is a very old stone font and some remnants of carved wood timbers.


I climbed the big hill that overlooks the ocean and found my secret seat once again.  It's tough to find.  I almost didn't recognize the spot.  It's perfect though.  Really perfect.  You have to climb over the crest of the hill and then clamour around the side.

There, sitting cross-legged, I fit into the rock perfectly, back support and everything.  The view from there looks down the west coast towards Cardi island.  Really amazing.

Then we went down to the beach far below.  My dad and I went for a swim later in the afternoon while my mom relaxed.  The water was freezing cold but it was nice to get out in the waves.  The place was "chalk-a-block" full with people.  I actually saw (and said hello to) Rhodri Morgan, the first prime minister of Wales, now retired.

Later that night we went to a real nice tandoori restaurant in Cardigan.  The manager was great, maybe the best service I've had in Wales.  I think the restaurant was called Abdul's Tandoori and if any of you are ever in the area, I can't recommend it enough.

During the week, we went to Devil's Bridge (not too far from Aberystwyth) and walked down the uneven steps in the rock face to see the roaring water fall that flows underneath.  There's actually three bridges here.  The original stone bridge, a larger stone bridge over top and then the iron train bridge over top of that.  There's an interesting little myth about how the first bridge was built.

The story goes, an old woman was walking with her dog.  Her cow had somehow wandered across the raging river and the devil, hearing her cries, appeared and told her that he would build her a bridge to cross the river.  There was a catch however, as there always is.  The first living thing to cross the bridge, he would get to keep.

Well, the woman thought for a minute and then threw a loaf of bread across the bridge.  Her dog raced after the loaf and was the first living thing over the bridge.  Of course, the dog was no good to the devil and that was the end of that.  It's said that the devil was so embarrassed that he never came back to Wales! 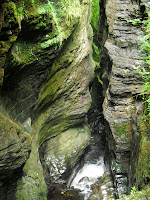