Week 30 - A Digression: The Quest to Learn Welsh 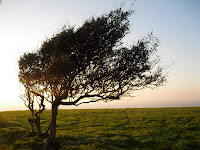 I'm not very gifted when it comes to language.  Even writing a simple email is a struggle.  I'm not like my sister who is able to write stories and poetry quite naturally.  Considering the difficulties I have with just the one language, I've realized that I have almost no natural affinity for a second and definitely none for a third.

Which is a problem as I've been on a long quest to learn Welsh, the impossible language.

I think Welsh may have always been there in the background murmurings of my childhood (for most of my youth, the English alphabet just never did look right) but my first very clear memory of the language came when I was about eight.

For one of the show and tells, I remember writing out the Welsh alphabet and the name of this Welsh town "Llanfairpwllgwyngyllgogerychwyrndrobwllllantysiliogogogoch" on the black board.  That was the best show and tell ever! 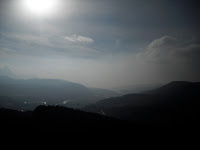 My next memory of the Welsh language happened on my second trip to Wales when I was about ten.  I kept a journal of that trip which is extremely funny.  I had just finished reading Lord of the Rings and, of course, everything in Wales reminded me of the book.  I wrote silly things like, "Saw an ancient oak tree.  There are sure to be elves here..." or "Searched the castle today.  I think there's a secret treasure hidden behind the left wall..."  or "I might have seen a hobbit today..."  ...of course, it was only me looking into a mirror but never mind...


Also in that travel diary, is my first attempt to learn Welsh.  I took notes of all the signs.  Things like "tynnu" and "ar gau".  Of course, that's about as far as it got.


Every subsequent trip to Wales after that, I was hyper-aware of the Welsh being spoken.  It always sounded so musical and magical.


Since then I've had many half-hearted attempts at learning Welsh through cassettes, vids, lessons and books including a failed trip to Caerdydd in 2000.  I nearly stayed in Wales that trip.  But that story is for another time.


It wasn't until 2008 that I decided to get serious and finally learn the language once and for all.  I traveled to Aberystwyth for the Cwrs Haf, a four week Welsh language intensive.  That cwrs was amazing!  The people in the class were incredible and they all spoke Welsh throughout the entire time.  By the end, I was absolutely fried.  But for the first time ever, in the history of my attempts to learn Welsh, I began to actually think in Welsh. 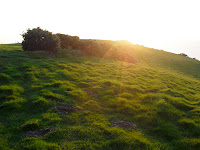 If I had maybe stayed longer, it might have sunk in deeper.  But as it was, nearly all of it disappeared during the next two years.  It was strange how fast it left.  But as I said, I'm not gifted with languages.


So here I am, in Wales since March and not really speaking any better.  So I registered for the last two weeks of the summer cwrs this year.  Still, by the end, I don't think I made much progress.  That's when I finally got fed up and decided to start making vocabulary lists.  Just straight up memorizing but it didn't seem to really help either.


But something happened just this last week.  Week 30 it must have been...


I spoke Welsh nearly all week.   And finally, I started to think in Welsh again.


It's small but it's a good start.


Enough mucking about, time to, once and for all, become a Welsh speaker.