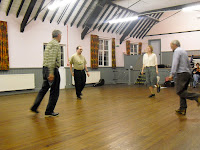 I went to the Welsh dancing again.  It's always interesting.  Nigel tends to do different dances every week, which is sure to keep up the interest in the veterans, but I really can't remember any of the forms.  I got to see Elsa clog dance with the boys (Keith, Howel and Nigel).  She's so good and so naturally graceful!  I'd love to try some Welsh clogging at some point but it's on a long, long list of things to do.


On the Wednesday, Gwil and I went to Dolgellau to teach in the Welsh language school.  Only one kid was really not interested and I think it may have been because he didn't speak a word of Welsh.  Other than the one kid, it went really well.  Gwil's got everything all planned so I basically just help a little here and there, and then accompany the kids on harp once they've learned a bit of the tune.

I can't understand the headmaster at all.  His Welsh is Anglesey Welsh and his accent is so strong, I really can't understand a word.  How frustrating!  I don't think he really gets what we're trying to teach the kids.  He doesn't seem to speak musician-ese.  But, fair play, he'd like to see them perform in the Christmas pantomime. 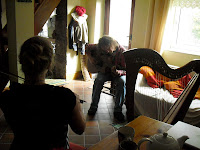 Later during the week, I made a trip to Cardigan in an attempt to get a house gig.  It didn't go as planned, as there was a new owner at the coffee house I was thinking of.  I gave him a CD anyway (very poor quality) and I don't think he was very keen on it.  Oh well, worth the try anyway.  Although, it's an insanely long trip on the bus to get to Cardigan... err, I mean Aberteifi.

Actually, I'm really not sure what to call the place.  Aberteifi is the Welsh name but Cardigan, at least to my ears, sounds equally as Welsh.

After that, I made another trip to Ystalyfera to do some jamming with Martin and Sille.  It seems like an age ago now.

We were supposed to meet up with Phil the drum but he was too hung over to make it!  That's alright though, because we played through quite a few tunes anyway.

They're trying to get me ready for this twmpath gig near the end of November.  I'm a bit slow but also slowly getting better.


We took a really long walk along the old railway track along the mountain's edge.  The track itself has been removed unfortunately.  But there's still lots of old ruins from that time and Cwm Tawe itself is a beautiful valley.

Here's a few of pics to check out.

We also had a nice evening at Y Wern Fawr, the local pub.  At least, I think that's where we went.
We ended staying past closing time and had a nice chat with the bar owner.  I can't remember her name now.  I want to say Tammy or something like that.  Shame on me for not remembering!
I do remember speaking quite a bit of Welsh that night but I can't remember why.
We didn't go over board on the drinks, we just had a really great time.  But then, I always do with Martin and Sille.
Martin gave me a ride back into Swansea on the Sunday.  On the way home, I caught the earlier 701 bus which was a luxury compared to the other buses and for the same price as well.  A sweet sweet ride home for a change!
I don't remember what I did that evening.  This might have been the Sunday that Catrin made these mini dollar pancakes.  I think she called them dropped scones or something like that.  Then she fried up some apples in syrup, layered it all together - pancake, apples, pancake, apples... and then home-made chocolate sauce over top.  What!?!  So freaking good.  Maybe the best food ever invented!
Duw, I'm getting hungry all of a sudden...

Next time, I actually make it to Welsh class, another session in Dolgellau and an extraordinary weekend at Yscolan...