Week 31 - Pencader Jam Session and a visit to Dolgellau

I can't remember how or why, but for some reason I made a trip to Pencader.  I think I decided to drag Gwil down there for another little jam session.  Actually, now that I think about it, this may have been the time Gwil discovered he was going to Pencader because I told Julie over Facebook that he was... even though I didn't ask him.  Funny!

Anyway, Steff showed up for part of the evening.  Man, he's a phenomenal player!
He had a modified crwth* which sounded much better than all of the other crwths I'd ever heard.  Much mellower and killer tone.  He also played mandola part of the evening.  Steff played quite a few corsican tunes and told quite a lot stories about the place.  It was the most I'd ever heard him speak and it was riveting.  I requested he play the Corsican lullaby that I'd heard from him five months ago.  He went right into it without skipping a beat.
*Crwth is a native Welsh instrument, sort of a cross between a lyre and a fiddle and it sounds a little bit like a hurdi-gurdi.  The Romans were the first write about the Britons and their crwths.  Very old instrument!

The infamous Christine Cooper came over as well and jammed some tunes.  I'd heard lots of stories about Christine already and she definitely lived up to them all.  She's so confident and just puts everything on the table as it were.  Very admirable.

Christine requested a couple of tunes from Julie and I.  Julie sounded beautiful!  It's that stillness in her voice, a stillness that moves... it blows my mind every time.  I hadn't played the tunes with her in a while so was struggling to remember.  I played muted trombone, using my pj's as a mute.

Gwil and I also played some sets together.  It was pretty sweet.  Gwil's tone, timing and musical sensibility is incredible.  Even though we come from very different backgrounds, we're able to find and understand each other through the music.  But more on this later... 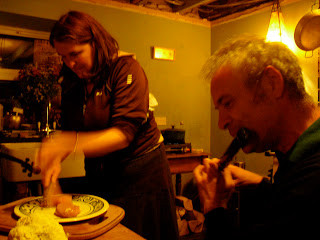 It's great to be around Julie and Ceri "Fliwt", they're both so charismatic and fantastic story tellers.  Julie tells these short, fast and funny stories.  Like little viniettes, punctuated with some rather appropriate curse words.  While Ceri "Ffliwt" tells equally funny stories but more in the long 'epic' heroic tradition, where even the simplest event turns into a vast journey.

Ceri "Ffliwt" had twisted his ankle quite badly.  It was completely swollen and bruised.  He hadn't been to a doctor yet.  He said he was feeling better and even showed us the dance steps to a gavotte... and then maybe a couple other dances...  Even I was wincing with every hop and skip he made!  Of course, by the end of the night, he could barely crawl let alone walk!  He somehow managed to drag himself, on all fours, up the stairs to bed...


We listened to part of the new Fernhill album.  It's one of the best all around albums I've heard in a long time.  It's a record that is simply amazing and it just happens to be Welsh, if you know what I mean.  Don't know what I mean?  Well, by that, I mean, it's great music above all else and is Welsh simply by accident.

There's not a lot of great Welsh folk albums out there.  The problem seems to be that Welsh folk musicians are so self-consciously Welsh and/or they're so very busy pushing out their Welsh national agenda that they forget to make good music.  That's why Fernhill is the best in Wales.  They just make great music that could be made anywhere in the world.

Christine has done some spoken word on the album.  It's a delicate line, spoken word and music but they pull it off beautifully.  She spoke about childhood memories, the images were so vivid and, as she said,  universal.  Funny enough, I could have sworn she was talking about Saskatchewan! 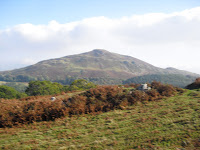 On the weekend, I went to Veronica and Mary's in Dolgellau for a visit.  Veronica showed me some of the art she's had published.  Some really great and interesting work!  Thought provoking for sure.  I was thrilled to get the chance to see her artwork.  I sometimes think it's the only way to really get to know a person.

Anyway, Veronica took me on a couple of beautiful walks around Dolgellau.  The landscape there sometimes reminds me of the interior of B.C., sometimes what I imagine Spain to be like and then sometimes of Middle Earth. 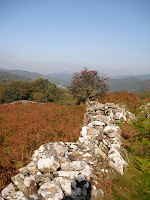 Later in the evening we met Cris and Mandi at their pub the Cross Keys.  It's a cozy little pub with a miniature gay scene which is cool for such a small little town.  We had a nice time just chatting and, of course, drinking.

Mandi thought she might have had a spiked drink the night before because after only nine pints and some shots, she was dancing on the tables.  Nine pints?!  I would have been on the floor after nine pints... But apparently she gets in around 20 pints on a slow night!


Next, a busy week of traveling again to Dolgellau, Aberteifi and my second home, Ystalyfera...