Week 39 - The pilgrimage to Bethlehem 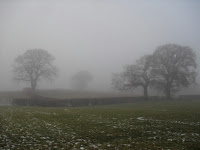 Bethlehem... right.  Before you get all excited, I'm referring to Bethlehem, Wales which is a tiny little village near Caerfyrddin.

I caught a bus into Caerfyrddin but then missed my connection.  Jay was kind enough to pick me up so I wouldn't have to wait in the cold.

We went through Llandeilo along the way.  It's a great little town.  I was surprised.  The shops seemed very hip and quaint all at once and it felt like a place that I'd be happy enough to live in.

It was so sweet to visit with Jason and Vicky.  They're just both so warm and welcoming.  A little later, Martin and Sille showed up and food and drinks were soon to follow.

Sille was super excited to play christmas tunes as this holiday is not as big a deal in Wales as it is in Estonia.  She had all sorts of tunes and arrangements worked up.  Even a Boney M. tune!  It was way too much fun!  We even sang, a cappella, Gaudete... some 1970s reworking of an old latin hymn.  It rocked!


For the show, Martin played guitar and squeezebox, I was on harp and trombone, Sille was on fiddle and hurdy-gurdy and Jason played flute and some pipes.  The sound was so sweet and lush!

The roads were quite icy that day so there were maybe a few less people than expected at first.  But once it got going, it was a great communal gathering for the local village.

The whole event was opened by a couple of S4C TV hosts (mother and daughter) but I didn't really know them.  There was a market fair set up outside which was quite nice.  Little Robin was there, selling some sheepskins.  It was good to see her but she did seem a little down.  I guess she can't find anyone to make music with, which is tough.  Kate (who had made all the great plates and cups for Jason, Vicky, Martin and Sille) was there selling her work and helping with the festival.  Check out her work here...
http://www.kateglanville.com

At some point during the afternoon, Jason pulled out the Penderyn, Welsh whisky.  It's literally the best whisky I've ever had!  We were also fed (I had a veggie burger) and later had hot chocolate.   Sometime in the afternoon, Peni and Steff showed up as their x-mas gig had been cancelled.  They didn't stay long though.

In the furthest corner of the hall, Siôn Corn was waiting to give presents to all the little kids.  Siôn Corn is the Welsh Santa Claus (apparently, he used to dress in a green robe and hat, rather than red).  I remember Gwen asking me about Siôn Corn and, at first, I didn't know who that was at all.  Of course, all sorts of mythological bells were sounded once it was explained to me.


Because of the bad road conditions, the choir was quite late.  So we ended up playing for about four hours straight.  Back in Canada, the musicians would have been griping and complaining about that, but to be honest, we were all having so much fun, I didn't even notice we played for so long.  And what with all the great tunes and great music we were making, I probably could have played for another couple of hours!  Eventually though, the choir showed and we were required to stop. 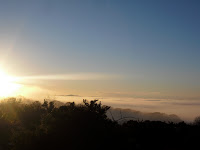 Also, it must be said, we played the world premier of Boney M.'s "Mary's Boy Child" on hurdy-gurdy, trombone, flute and squeezebox.  Hell, yeah!  That instrumentation had to have been a first!

Later that evening, of course, we played more tunes, ate some great food and had more drinks.

Vicky and Jason's place is a gorgeous little cottage that rests in a small valley with a bubbling brook running right beside it.  It's literally perfect.  I slept in a bit but then was treated to some porridge for breakfast, which is my favourite. 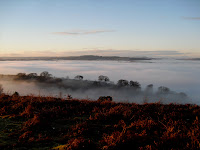 Martin and Sille had to take off shortly after that.  That day, the fog was unbelievably thick.  The entire valley was absolutely engulfed in this rolling white-gray.  Vicky and Jason took me up on a long hike to the Carn Coch hill fort.  Once we got past a certain point of the mountain, we cleared the fog and were bathed in sunlight.  Looking down on the valley, the fog was like an ocean of mist.  Little mountain peaks looked like islands out at sea.  It was tempting to go swimming out in that ocean.  It was so beautiful and amazing.  A place out of all time... 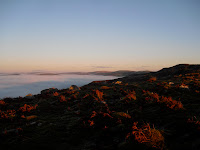 Eventually though, I had to leave.  Jason drove me all the way into Caerfyrddin again where I caught the bus back to Aber.

And that was my beautiful experience of Bethlehem.

Next, Cei Newydd, Dolgellau and back to Canada for Christmas...