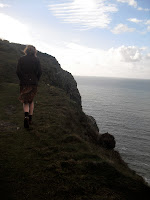 I got back from Llydaw (Brittany) on Monday.  I went to the regular Aber dance that night.  It was great to see Elsa and Gwilym again.  If I'm remembering right, Elsa later came in for tea.

I ran into Bethan (from Edmonton) quite randomly on the street but haven't heard from her since.  I also happened to run into Gwil on Tuesday.  Later Elsa came over the same day.  I made some lunch, which I think was spinach-watercress soup and then we went for another long walk up into the cliffs.  I may have shown her where the secret stone circle is.  That was also the day we went to the Aberystwyth museum.

The rest of the week was uneventful and my timing was quite a bit off.  Managed to miss two buses actually. 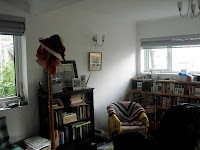 Anyway, on the weekend I went over to Elsa's house in Cei Newydd for a quick jam session.  I saw Aunty Susan very briefly that day as well.  She's such an amazing character!  Elsa was a bit nervous around my aunt, though fair enough.

I really loved Elsa's little place.  It's really quaint and she's got all sorts of interesting knick-knacks and cool books.  All very cwtchy.  It was a great little session as well.  She's always a joy to play with!  And we did manage to fit in a short hike over the cliffs before leaving for Keith's farm.

That evening, I played this Samoan-Welsh wedding with Gwilym, Elsa and Keith while Nigel did the calling.  It was an interesting mix of Welsh Twmpath and Samoan dancing.  Again, I was playing completely on the fly, no charts, just trying my best to keep up.  The first set went pretty well but the second one was tougher.  I had trouble hearing where the tunes were going.

It's quite a thing to just make up chords as you go.  On first hearing, the first time through a tune, I just went for the basic chords to see if they fit the music and then adjusted as I went and mostly by the second time through it was all sorted.  Mostly it seemed to work alright... but what a tough, tough work out on the ears.


And that was that weekend...

Next, up to Dolgellau again and finally, another Corelw...