Week 38 - The Gower Allstars in Caerdydd 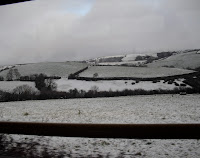 I taught in Dolgellau again.  Not too much to report there, except that the kids are extremely amusing.
It snowed close to the weekend.  Bronwen happened to be at the bus stop.  None of the buses were running, which was so funny for the amount of snow there was.  There was a massive line up for the bus so I decided to go buy some tea instead and maybe catch a later one.  But the bus still hadn't left when I returned so I hopped on.

I met an interesting academic named Brian, who knew a fellow in Toronto who was an early music specialist.  He told me to try to get in touch with him.  I also met this punk-indie girl.  She was quite funny to talk with and she was on her way to somewhere in Pembrokeshire.  And then I met Megan, a girl going to Uni in Aber and a Welsh speaker from Swansea.  A Welsh speaker from Swansea!  So I spoke quite a bit of Welsh to her which was good fun.

I eventually made it to Pencader where Ceri "Ffliwt" drove us into Cardiff for the Gower All-Stars gig.  The gig was with Martin, Sille, Ceri "Ffliwt", myself and their friend Phil, on the drums.

When Ceri "Ffliwt" and I first arrived there, we walked down Queens St. to go for a quick pint and watch some rugby.  Did I ever laugh!  The two of us country bumpkins.  Him in his tweed and me with my plaid amongst all those yuppie hipsters... must have been a real sight.  I was having visions of the past... 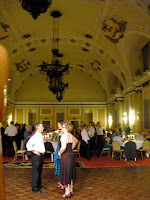 Anyway, the gig was in Cardiff City Hall.  The place itself was quite fancy, with the actual Twmpath being held in a massive dining hall.  The band sounded great of course.  It took awhile to get the folks to dance this time around and I even went amongst the crowd to encourage them. They were more interested in visiting old friends, which is fair enough.  But once we did get them going, it was a very good time.  All of them were dressed quite sharply.  I played alright this gig.  Martin had prepared me pretty well so it wasn't too bad.  He'd even made a ton of chord charts so my job was very easy.

An odd side note... there are some very strange sculptures in Cardiff City Hall of Welsh historical figures.  They're strange for a couple of reasons.  But perhaps I'll rant about that later.

Anyway, Martin worked extra hard on this gig.  He set up the sound system, mixed the band, was the main contact, called the figures for the twmpath, looked after us by finding us food and drink, and managed to play guitar as well.  He seriously deserves a medal ...and several shots of whiskey!

A sweet gig all around, yn wir.

Next, a pilgrimage to Bethlehem... yes, yes, I said it... Bethlehem! 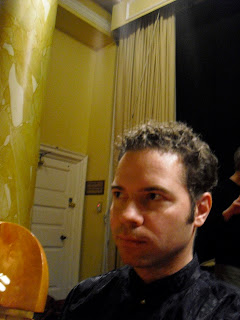