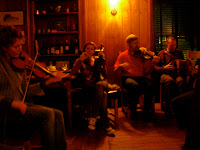 I went to another Welsh class.  Alice really keeps us moving forward.  She's utterly fluent so I'm glad she's there to pull us along.

I met again with Elsa.  I think we went to see a movie... ah, yes.  Harry Potter.  I like Harry but the movie was a bit, well, boring.  The cinema in Aber is really sweet though.  There's a concession stand right down by the screen.  How cool is that?!  I had a lovely time with Elsa as she always tells these crazy stories about all her adventures.  She's traveled around the world quite a lot, which shouldn't have surprised me, but it did anyway. 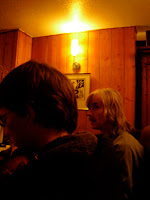 There was another Dolgellau session this week with Gwil, Elsa, Keith, Gary, Jem, Phil and Bronwen.  There were a handful of people I hadn't met before.  It did seem like a very intimate session.  Keith sang a Mari Lwyd tune and Elsa was playing with a ton of confidence.  She started a bunch of sets, which I hadn't heard her do before.  Her and Gwil also played my tune, "Aderyn Du Aberdâr", which was nice of them to do.

A flute player played a version of the traditional tune "Dawns y Gwr Marw", as arranged by Steven Rhys but it was quite pedantic... changing keys every time through.  At first, it was alright but after the fifth key change, it turned into a pointless exercise.  Right after it, I played my arrangement of it with Gwil and Elsa, but the fellow didn't seem that interested.  Ah well, you can't please everyone...

At some point later in the week, I went to play with Martin and Sille in Ystalyfera.  We were rehearsing for a Twmpath in Cardiff later in the month.  Martin just had his bazouki fixed up.  Duw, duw, did it ever rock!  It was an amazing sound, especially with the harp.  He was playing these great counter melodies and nice syncopated rhythms.  I nearly jumped out of my chair when I heard it!

As always with these two, there were great tunes, lots of drinks and fascinatingly humorous conversation.  They've both really taken it upon themselves to look after me.  I won't be able to thank them enough for everything they've done. 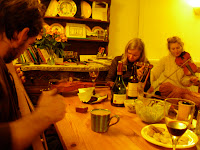 That Saturday, Corelw hosted a Twmpath right in Ystalyfera.  It was a very good dance, although the crowd wasn't massive.  It was the usual crew of Steff, Peni, Jason, Vicky, Ceri "Ffliwt", Julie, Martin and Sille.  They played all sorts of dances, from Welsh Round Dances, Long Ways Sets, Breton Gavottes, 3-time bourees (something I can't really dance to), schottisches, waltzes and the like.

Ieuan, the reciter, was there.  He's got a quirky sense of humour which kind of reminds me of my friend Ieuan Canada (originally from Penclawdd).  And he kept reminding me that I wasn't speaking "Welsh", I was speaking "Cymraeg".  Chwarae teg, Ieuan, chwarae teg! 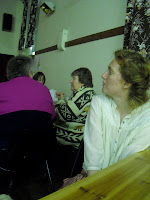 Elsa drove in all the way to join us.  The two of us danced most of the night.  Elsa's so light on her feet and there's me clomping around... At any rate, it was great to hang out with her again.  After the dance, we all jammed past four in the morning.  I didn't really drink so it was a good little session.  How they all were able to continue playing even after such a long gig, is a wonder to me.  They're all so passionate about playing that they never want to stop.  And they are continually learning new music.  Every session, they share new tunes and new ideas... how incredible is that?!

Sille absolutely fell in love with Elsa as I think most people do.  Her playing is so magical and delicate and emotive.  I think Sille may have found a kindred spirit. 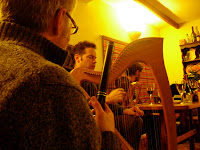 Steff gave me a bit of a compliment.  After one tune he said that we were picking out very similar chords, then he nodded, smiled and said 'very nicely done'.  He's an incredible musician so I'll take that for all it's worth.


Next, a gig in Caerdydd with The Gower All-Stars...