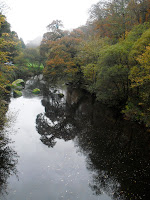 A quick digression...
The French government still hasn't recognized Breton as a language.  Shame on you Frenchies!  I was talking to Bernez about it.  He believed that during the 70s, there were maybe a million people speaking Breton.  That number's now dropped to around 300,000 but most of those are in their seventies.  He was sure that in the next ten years, the number of speakers would drop to around 40,000.  Frightening, isn't it?!  There are some Breton language schools now, but only 1% of the children attend them.  Perhaps, it is too late for the Breton language.

It's a shame because it is a living treasure.

Anyway, the trip in Brittany continues...

The next day after breakfast, we rehearsed for a couple of hours.  I forgot that in France, everyone smokes all the time.  Literally, ALL the time.  The wine was already out at the rehearsal as well.

William, the director and Julie got into a bit of a row.  William is a Shakespearian director and he was trying to get Owen to basically overact.  Julie was having none of that and consequently, I think Owen's reading was all the more poignant and beautiful.  It was great to see Julie actually care about the artistic side of the project.  I wasn't used to that really.  Most gigs in Canada, we just kind of put up with it all and then complain about it later.  It was a healthy reminder... that art is worth caring about!
We had a three hour lunch after rehearsing.  We started with white wine and bread sticks.  Next, a small starter of tomatoes in a vinigrette of sorts.  Then, the main meal (for me was vegetables) and then a small salad to cleanse the palette before the cheese and bread platter came out.  Of course, there was red wine throughout the meal.  Later, we also ate William's wife's apple crumble.


And then, there was more wine... and then some more wine!

After lunch, a local television crew filmed our rehearsal and then filmed us hanging outside of this beautiful church.  They also filmed a little bit with Yannick, Bernez and myself.  I wonder if I could find a copy somehow...

Julie and I went for a couple of really nice walks.  I think that's when we saw the Canadian tobacco store.  Julie took some great photos as well.  I had forgotten that she'd gone to an arts college. It's easy to tell though, she's got an incredible eye.  I think she may have posted some of her photos on her blog.
Later that evening, after a bit more rehearsal, we had a big party at Jean-Michelle's house with everyone, including Jean-Michelle's new girlfriend.  It took me awhile to figure out they were together.  Mind, he's in his fifties, his divorce literally went through that day and she's maybe around 27.  I know what you're all thinking, but to be honest, I'm pretty liberal when it comes to that sort of thing, so fair play.
I finally caught a cold (after bragging that I hadn't been sick all year) but I was determined to have fun and the cold barely even bothered me. 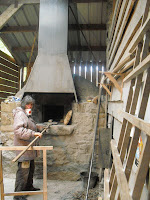 On the day of the show, we stopped by a proper clay oven bakery.  It was on this farm in a shed and did it ever smell amazing.  And the bread was to die for!  It was great to hear Julie talk about music with the Bretons.  She has a massive knowledge of Welsh folk music so that was a real treat.  I did speak quite a bit of Welsh with Owen, although Bernez (who's fluent Breton) did reprimand me once for not speaking it more often.  And he was quite right!

The show itself went very well with a sold-out crowd.  It was somehow easy for me to play and I didn't get nervous even a little bit.  Julie sounded beautiful as always.  On one song, she improvised the melody at the start and it was over the top amazing!  It was also great to hear KEJ play.  Free improv, if done well, is so gratifying to listen to.  And these boys were as cool as hell.
Annie Ebrel, the fantastic Breton folk singer, was there.  She's very good friends with Julie and I think Julie counts her as an influence, which is saying something.  Annie is very short and small which makes her powerful voice all the more astonishing.

The day after the show was very nice.  I met Bernez's wife, her ancestry being Acadian, which was interesting.  Apparently, her Acadian ancestors (part French, part MicMac) who had been living in New Brunswick were captured then shipped off by the British to a Cornish prison before being resettled in Brittany.  What an incredible story!
I shared a moment of emotion with Roy.  He was so grateful that I had been able to make it and he gave me one of his books with a signed note in it.  I was really touched by that and thanked him from the heart.  That made him a bit teary... a nice moment.  His wife Susan then took us for a little tour of a castle and a beautiful park.  The two of them are very nice, giving people.
On the trip back home, we stopped at a French restaurant close to the harbour.  We ate this artichoke with mustard vinaigrette and then I had an upside-down goat cheese and wine-soaked shallot pie.  Holy Crap!!  That was ridiculously good.  Even now, thinking on it, my mouth is watering!

What I liked most about Brittany, was how warm everyone was.  Every greeting included kisses and hugs.  Every meal was communal, filled with laughter and wine.  There's the way to live.

Once on the boat, we took the time to watch the coast disappear into the distance and watch the stars wander through the night sky...
Next day, we dropped Owen off in Cardiff, saw Tomos and his new baby and on the drive back to Pencader, I had an amazing chat about life and music with Julie.

It was absolutely the perfect trip...


Next, a Welsh-Samoan wedding with Gwilym and Elsa...