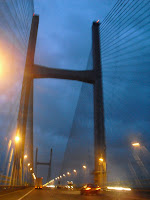 Well, I got a gig in Brittany, mostly through plain old luck.  Tomos "trumpet" was supposed to go there with Julie for this gig but his wife decided to have a baby that week.  Well, not so much decided but you know what I mean...

Anyway, I was happy to sub in.  Julie drove (as I can't drive standard unless it's an emergency) and we left in the late afternoon to catch the over-night ferry from Portsmith.
The drive from Pencader to Portsmith was about five hours which is nearly like driving in Canada!  Apparently, Portsmith was flattened during the war and there's a ghost of a shell of a church that still stands near the centre of town which is very eerie. 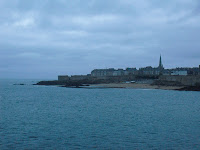 The wind that evening was quite strong and you could tell as soon as we got on the boat that it was going to be rough.  Trying to walk to our cabins was nearly impossible.  I kept bashing into every other wall!

This ferry was super chic and modern and the cabins were nice and cosy.  The next morning, we were woken up by the ferry's alarm clock which played some deadly Celtic harp music... at 6 in the morning... duw, duw.  The view from the boat as we came into St. Malo was unbelievable.  The harbour was surrounded by all these ancient little islands.  It was like being in an Arthurian romance tale. 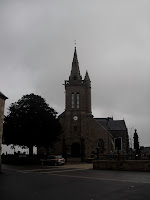 Julie had to drive on other side of road as I tried to navigate.  (Right side of the road or wrong side of the road, depending on your point of view).  At one point we did a little bit of synchronized driving through a traffic circle which I thought was fun... but to be really honest, Julie did an amazing job of driving over there!

We drove for a couple of hours to Roy's house.  Roy was the fellow who's gig it was.  He'd written all this poetry and had made a CD mixing the poetry with music.  This gig was to be his CD release.  Him and his wife, Susan, were all the way from England but had moved to Brittany, and, fair play, learned to speak French and a little bit of Breton.

Roy was so warm and kind, right from the start. 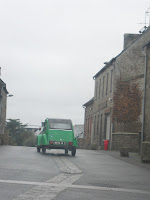 Anyway, he met us in this little town called Plûned (Pluzunet in French).  He drove up in this crazy little old green French car and we followed him back to his house which turned out to be a Manoir of sorts.  It's a fairly big house that was once a small castle.  The best part of the place was the large hearth in the living room.  But more on that latter.

Well, the first thing we did was have these little apple brandy drinks to celebrate something... well, just to celebrate.  It was now about 10 in the morning...

Roy had to pick up Owen (reader of the Welsh poems) from the station shortly after.

Once Owen arrived we have crepes for breakfast - one savoury, with cheese and mushrooms and the other sweet, with banana and chocolate.  And of course, more apple brandy drinks.

Owen's an amazing boy who's been living in Paris for the last while.  He's a native Welsh speaker but he's also completely fluent in French.  He looked the part of a Welshie in Paris too... with fancy French tabacco and those French style scarfs.  Owen could have been one of those poets from the late 1800s that perpetually had consumption... only in modern Parisian clothes.  He mainly works on translations but is also a great writer and a very well spoken, thoughtful fellow.

After breakfast, there was a short rehearsal.  I met all the people involved with the play.  There was William, the director from England (who spoke French), Bernez, the Breton poet musician (who only drank beer so as not to be too French), Jean-Michelle, the talented Breton flute and bombard player, Marthe, Breton singer and poetess, Yannick, the Breton sax player  (who may have been related to Obelix), Marianna, the German poet, Nanda, Breton singer and poetess, Emmanuelle, who played sax, bassoon and sang, Fañch, ancient Breton poet and KEJ, the great free improvisation group including Philippe on guitar, Jean-Luc on flute and Pierrick on bass, and then of course, Roy, Owen, Julie and myself.


We were a bit late that day, so didn't get a lot of rehearsal in.  Plus, the guitar player hadn't shown up yet but Julie and I played our piece together anyway.  I also played a bit with Jean-Michelle.  I should say, I played trombone on this gig which was alright.  Though, once the tunes started, I was really missing my harp.

To be honest, if I'd had even half a clue about Breton music, I would have been literally s**ting bricks because these people were some of the heaviest around.  And it didn't take me long to realize how good they all really were.


I heard quite a lot of Breton being spoken.  It's hard to describe.  In writing, it's easy to see how it's related to Welsh.  But spoken, it nearly, at first hearing, sounds a bit like French... well, not really... actually the vowels sound like an ancient version of a Celtic language and, of course, the rhythm and tones are completely different to French.  The rhythms seem to be more similar to Welsh... but at the same time, older.


Later in the evening, we went to a coffee bar for some beer and some snacks before supper.  Bernez showed Julie a little bit of a gavotte.  Quite a few of the conversations were in French and strange little bits of my French came floating in my head... but not enough to really form a proper sentence though.

It was mostly things like... Je suis un grande pamplemousse... you know, the usual!  (*this is actually from a tune that my friend Karen wrote back when we were in college.)


Later in the evening, back at the Manoir, we got into more drinks.  Owen said he had to make sure they all knew the Welsh had been to town so he was throwing back the drinks like crazy.

Julie and Owen had a long discussion about all things Welsh, from music, poetry, literature, the S4C, the Welsh government... topics they were both very well-versed in.  It was great to listen to their viewpoints on everything.  Particularly the juxtaposition of the S4C and artistry.

I think Owen put his disappointment in the S4C this way, "It was supposed to be ours.  Something that belonged to all of us.  And it just doesn't at all."

That sums it up perfectly.


Next, another day of eating and drinking copious amounts and somehow a rehearsal broke out...