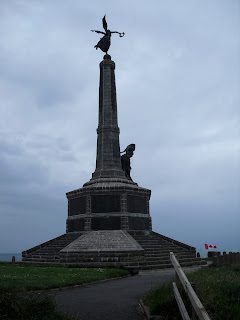 On the Thursday, I went to hang out at this cafe where I knew a Welsh learners group met every week.  The group was small that week but it was nice to have a good conversation in Welsh and meet some new people.

I met this Irish girl, Madison, who had grown up in Plwmp.  Her Welsh was amazing.  And I think she may be Boudica re-incarnated.  Tall, deep flaming red hair, punk ear things, blue arm tatoos, scars from old piercings.  After the tea, her and I took a short walk and continued our conversation in Welsh.  That was pretty cool.  She's looking for a job in Aber so might run into again later in the fall.

What?!  You don't know who Boudica was?  Ah... well, she's the original warrior princess.  Rather warrior queen.  She lived about 25AD - 60AD.  Sometimes referred to as Boadicea, her name means "victory".  In modern Welsh, her name would be Buddug.  She ruled the Celtic tribe called the Iceni, based in the area that is now Norfolk.  She was said to have been tall, with long red hair, wear a multi-coloured tunic and thick cloak with a gold brooch, a thick gold torc around her neck and to have a piercing gaze.  She led a revolt after her daughters were raped and she was publicly humiliated.  She gathered her forces and destroyed the Roman towns of Camulodunum (Colchester), Verulamium (St. Albans) and Londinium (London).

Yep, she burned London to the ground!  In excavations under the city, the layer of ash can still be seen.  Eventually, the might of the Roman Empire was brought down upon her tribe.  Facing defeat and death at the whim of the roman emperor, she took fate into her own hands, drank poison and killed herself.

Celtic history is almost never happy.  A weird phenomenon has happened in England.  They're basically trying to write the Celts out of their history.  The implications of that are disturbing.  But I digress...


Of course, at this point, I can't entirely remember all that's happened but I do remember another night out with Bjorn, and met a great Welsh girl named Crista.  We all talked Welsh to each other.  Also, somehow found myself part of this Gregorian chant practice with Bjorn.  The man leading it is an Irish American named Willie.  He was very funny and slightly crazy.  He started singing ballads to Crista, full volume, middle of the pub... which was great!

We wandered around town but didn't really find anything cool to do.

Bjorn and I spoke welsh all night, which was good.  To be honest, I can't understand him in English or Welsh so we might as well speak Welsh.  ;)    just kidding Bjorn!

I really dig Bjorn.  He's a great person with a great spirit.

Next, hanging with Julie in Aber...