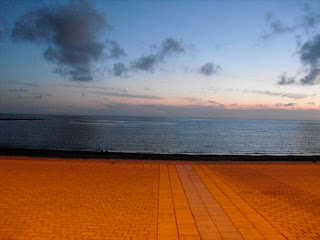 I went to the Cwps at some point this week.  Maybe the Tuesday?  Anyway, I had heard about an "open mic night" and I wanted to check it out.

Before heading to the session upstairs, I made some new friends on the lower level.  Bjorn and Ifor.  Bjorn is from Norway but also speaks Welsh and English.  Typical Norwegian, he's probably 6''5' or so, blonde and blue eyed.  And Ifor is a typical Welsh boy, short stocky and dark hair, Welsh speaker, who works up at the National library.  They were a good laugh and we drank a bit before I convinced them to visit the session.


The session wasn't quite what I expected.  It was an English folk session for one thing.  Everyone sat in a big circle and took turns singing their tunes.  What I noticed right away was how sombre the group was.  Very, very serious.  The strangest part about it was, almost all the tunes were rah-rah English tunes and a good portion were British war songs.  And not in the sense "war is bad" - but more about extolling the greatness of the British army and empire.  At one point, Ifor looked over at me and, good Welsh boy that he is, gave me look like, "Holy crap!  They're going to kill all of us!"

When they got to our part of the circle, I tried to convince Ifor to sing a Welsh tune with me but he wasn't keen on that, for obvious reasons.  So I sang 'Northwest Passage', which got a nod of approval from the group.  They took a short break and you could really hear a massive party raging down stairs.

So we went to check it out.  Welsh students celebrating end of term.  Pounding away at the piano and the whole room singing in Welsh.  It was fantastic.  They were clearly trying to drown out the English upstairs which made me laugh.  They sang a couple of Welsh folk songs but most of the songs were show tunes in Welsh.  That was really bizarre!  There's all these great Welsh folk songs and some great Welsh hymns but instead the choices were all modern broadway-esque tunes.  Strange, strange.  Good fun anyway.  One tune was very cool.  They took turn improving verses about each other, making fun of each other and that sort of thing.  Some of the verses were extremely rude and extremely funny.  Then a sing-along chorus.  This type of singing is very old school Welsh.  I enjoyed that.

I spoke quite a bit of Welsh during the night.  Talked Welsh to some of the students and to Ifor and Bjorn.

After that, we all went to Y Llew Du for more Welsh-ness and drinks.  I saw Anna from Poland, Martyn's old girl.  Martyn was a fellow I met on the Wlpan cwrs two years ago.  A really nice guy, slightly goth and liked to take part in medieval re-creations.  Anyway, she didn't really remember who I was.  She's also no longer with Martyn and all I could get out of her was that he's not in Aber anymore.  Drueni!

After that, Bjorn and Ifor took me to this place called The Angel which is a Goth type after-hours club.  I talked some more Welsh and then at some point, maybe around 3am, went and got some pizza and ate it on the beach.  There were some students there, one playing the trumpet which was nice along to the ocean waves.

Then a crew of people came to the beach and decided to go skinny dipping.  LOL!  That was my cue to head home.

It was much more epic than I have time to write about but trust me... absolutely epic!

Next, a night of gregorian chant and chatting with Bjorn...