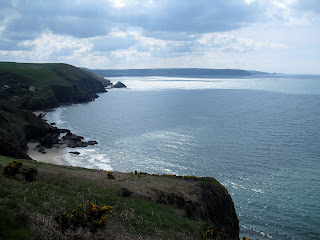 Another random photo, near Llangranog...

I went straight to Cei Newydd, harp on my back, to met up with Aunty susan.  I had some trouble with the bus.  That is to say, I missed my first bus out of Ystalyfera.  Had a nice chat with Sille though and she played me some hurdy gurdy.  Once I got going, it must have been about a 5 hour ride.

On one part of the journey, I met this woman named Marionne.  She offered to give me a lift with her husband from Caerfyrddin to Cei Newydd.
She also took my contact info because she wants me to play at her anniversary.  Her husband didn't show up in time, so I had to grab the next bus out of the station.  Which turned out to be good luck as I met another woman named Julia.  She was one of the directors of this festival called 'Small Nations'.  She invited me down to the festival as long as I brought my harp.  She was super nice and we had a good chat about music.  She also knows Peni Pipes (from the Twmpath band).

Eventually, made it to Cei Newydd and had a great visit with Aunty Susan.  She let me read parts of her new book which is soon to be published.  It's a very interesting history of the parish surrounding Cei Newydd.  Next day, we walked miles.  Starting up the cliff path and then cutting across through a bunch of fields.  I'm not sure how many miles we walked but I'll just say, Aunty Susan is nearly unstoppable!

I'll just take a brief moment to mention some of the plants that she pointed out along the way.  There's the Alexander plant, which was brought over by the Romans.  I think they may have used the seeds of this plant in their food.  Strangely enough, the Romans also brought little door mice to Britain, which they used as food.  And they called the Celts barbarians!  Ych a fi...

There's the mare's tail, which is a tough fern-like plant that will grow through asphalt.  It's been around since the dinosaurs.  I suppose it could have its origin about 200, 000, 000 years ago... give or take a few 1000 million!  We also saw Tresi Aur, which I think is Golden Chain in English.  The hawthorn flowers were out and of course, the gorse was blooming.  Both have extremely hypnotic smells.  Why hasn't anyone made perfume from this stuff?  We walked through a field of yellow flowers and saw piles of pink ocean flowers clinging to the cliffs, neither of which I can remember the name.  We also saw some Canadian geese which was odd.

The next day, I walked down to the pier and, incredibly, saw three dolphins having a play.  And me without my camera!  Duw, duw...  The dolphins and the sound of the ocean put a tune in mind but I wasn't able to write it down.

I also went to a Welsh learners class held in the hall.  I did my best to keep up.  There were lots of nice folks here and I'd like to get back to visit them if I get a chance.

My Welsh is pretty bad.  I can get by alright but I think I need to really dig in and break through that wall.

Next, I'm back to Aber for my birthday...