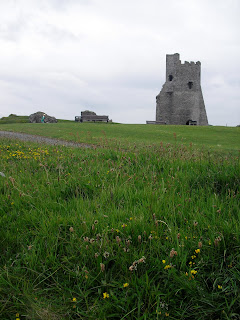 I met Harriet for some tea and tunes.  We've been exchanging ideas.  She taught me some Irish tunes and I showed her a couple of Welsh tunes that I knew.  I also taught her my new tune 'Aderyn Du Aberdâr'.  Her version of it was fantastic!  Almost like a fantasy.  She's very quick, picks up and expands on things extremely well.  She's got incredible technique, very fast and fluid, with lots of ornaments.

She's also very generous.   Somehow, she found the time to get me a pile of little presents for my birthday.  That was really touching!


Next day I met with Gwilym.  That was a very cool hang.  He's utterly steeped in Welsh folk music, in particular, Welsh folk dance music.  It's amazing!  I really love his tone and his time.  He's got a great feel.  The only thing I could compare it to, would be when I play funk on the trombone.  Sort of... hopefully, you get the idea.  Anyway, he's also been researching Welsh tunes at the National Library.  I think he's collected three little black books of tunes - well over 100 tunes in each book.

It's a subject that he's clearly passionate about.  We sat and chatted for most of the afternoon.

He was able to understand what I was doing on the harp (re arrangements and singing) far better than I could.  He said it more eloquently but basically, (I have to paraphrase) he said I was playing notes that didn't quite work and then passing through them.  And that I was writing counter melodies on the harp.   I didn't really know I was doing that.

I suppose that's strange to say, but I mainly work intuitively so I never have a clear vision of where the music is taking me.  Gwil gave a path, a direction to move musically which I'm really grateful for.

Oddly enough, I'm the same when I draw.  I do know some artists that draw perfectly the first time.  Don and Cass both come to mind.  They seem to have a clear vision of exactly where each line is supposed to be.  But I'm more of a sculptor.  I sculpt the image onto the page, all by feeling.  All by feeling.  I'm the same way with music.

At any rate, Gwil's got massive ears.  He listens to a tune once or twice and then just starts playing it.  I was floored!

Very cool dude, and we promised to jam again (especially after I learn the tunes he was patiently teaching me).

Next, an epic night at the Cwps...