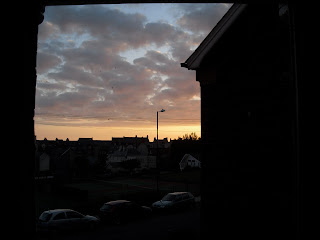 Shamefully, I didn't bring my camera.  Which was too bad, there was lots to see.  So here's a random picture instead.  It reminds me of that saying, "Red at night, sailor's delight.  Red in the morning, sailor's warning."

Anyway, I caught the bus to Swansea once again.  It was ridiculously crowded and hot.  Barely got the harp to fit in.  I met this fellow named Mike from Nigeria.

He was studying philosophy at Llanbedr.  He told me how much he missed both the music and food from his home.  He often traveled to Abertawe to get Nigerian food.  Mike was eager to talk philosophy with me.  He was enjoyable to chat with though I had to disagree with some of his reasoning.

For one thing, he said he 'commits good acts because he knows he'll be rewarded later'.  (Turns out he was a christian philosopher.)  I find that an odd thing to say.  Wouldn't you be good just because?  For instance, wouldn't you be good just because a fellow human being is in need?  And isn't any good act suspect if the underlying intent is only to be rewarded in the afterlife?  At one point, after he was talking about why this and why that, he asked me what I thought and I simply said "I play music."  He understood the hidden meaning, laughed and shook my hand.  All my respect goes to him for that.  Then he started talking about finding one's way in the world, one's purpose, one's joy.  He was a real nice guy and I'm sure to see him again.

Eventually made it to Ystalyfera.  I practiced with Sille and Martin.  I can't say enough about these two.  But since I've already waxed poetically quite a bit as it is, I'll just say this...  I had to be as open as I've ever been in order to match their sensitivity and grace.  There was no other way to match their abilities and talent.

On the weekend we made a trip to visit Vicky and Jay (from the twmpath band).  To get there, we drove over the Black mountain (Y Mynydd Du).  The landscape here is like being on the moon except with grass tufts covering the place.  Just when I thought I'd seen all there was to see in Wales...  That evening, we went to this strange gig in the rugby club in Llandeilo.  The bands weren't very good.  I drank too much beer and was talking nonsense.  I slept in Jay and Vicky's camper van which was very cozy.

Next day, I woke up early and went for a bit of a walk.  Found a grove in the trees that called out for some qigong.   In the afternoon, we went to Carn Coch in the Tywi valley.  It's a large old Celtic hill fort with most of the stone walls still in tact, and one of the gateways was still standing.  The walls were massive and even in ruins were very impressive.  These remains could have been built as early as 800BC.  At the very top of the hill within the hill fort, was a bronze age cairn, a burial mound.  This site may have been built nearly 5000 years ago.  And there's me without my camera!  Anyway, we saw a buzzard in the distance, riding the wind.  Very soothing to watch.

Vicky and Jay's house is right beside a gentle stream.  We sat outside most of the day and ate great food.  Jay has a little lap harp.  The tuning was strange but it had a nice delicate little sound.  I played some apHuw, transported us to another time, and then we jammed some tunes together.  It was perfect!  Vicky and Jay were so giving and generous.  They're good people.

We eventually made it back to Ystalyfera and jammed some more.  All around, an amazing weekend.
Next, a visit with Aunty Susan...