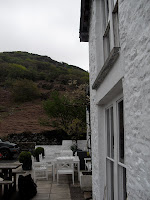 I took the bus up to Dolgellau for another session.

It was the same bus driver, who when I asked how he was doing said, "I'm fair to immoral".  He always comments how I'm sneaking in my baretta disguised as a harp and tommy gun with ammo as a trombone.

It was about a two mile walk from Dolgellau up to the hotel, Gwesty Gwernan.  The walk is up a rather long hill which was hard with the harp on my back.  A woman saw me and felt sorry for me, so she ran and got her car and gave me a lift.


I met Ruth who runs the bar and the server Haf (pronounced Hav, which means Summer).  They both speak north welsh, but I did my best to speak to them.  Their accents were very difficult to understand.  Haf also plays the harp and works about three jobs.  She's a real character and kept saying all sorts of funny things to me.

Ceri Ffliwt arrived shortly after and spoke quite a lot of Welsh to me as well.  We both had the aubergine bake, very nice.

It was a good session but slightly strange feel.  The spread and variety of players was massive and there was a singer-songwriter named Caroline there who recorded it.  She was a nice singer but having it recorded gave the night a bit of unease.

I met Elsa there and her friend Bronwen (fiddle) from Toronto.  Elsa's a wonderfully dreamy player.  There was a dobro player there and another fellow Keith on fiddle.  Ben and Maria were there again and Ben played a nice jig on the harmonica.  Too bad Gwilym couldn't make it.  Really missed his playing.  The english singer, Phil, was there again.  He's got huge collection of folk songs and he's got a great voice.  Ceri Ffliwt sang some great tunes as well.  Some really beautiful Welsh folk songs.

I was going to sing "NW passage" but didn't seem appropriate with all the spring songs being sung.

I sang the song to Ceri in the car.  He knew this other folk song about Franklyn and had had a conversation with Christine about it.  He thought it was perfect to hear "NW passage" in the car, sung by a Canadian.   Anyway, we worked on Mae'r Ddaear for a bit.  He explained Welsh rhythms and the words.  Welsh is different in that way from English.  Welsh language basically dictates the rhythm of a melody where English is much more fluid.

Next day in Aber, I practiced tunes.  I met Sarah's friend from the radio - Cerian.